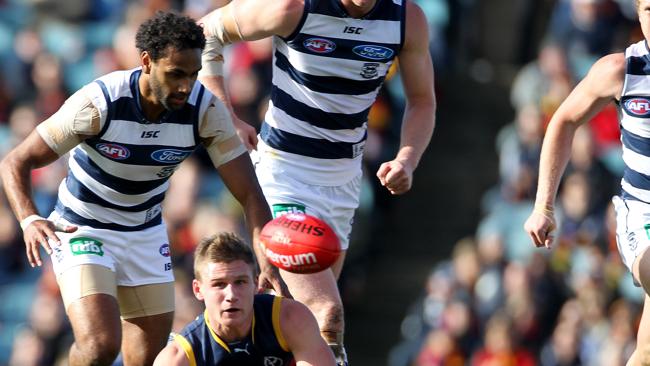 A CROWS fan has been fined by SA Police and banned from AAMI Stadium for the rest of the season for racially abusing Geelong player Travis Varcoe on Sunday.

The Adelaide Football Club today will continue to investigate the incident before deciding if the elderly man will lose his Crows membership.

The Crows last night contacted the Geelong Football Club to ensure Varcoe was satisfied by the club’s action.

It is uncertain if Varcoe was aware of the abuse from the SANFL members’ stand on the western side of AAMI Stadium.

A Geelong fan made the complaint to SANFL security staff during the match, as the AFL has encouraged since Brownlow Medallist Adam Goodes took exception to the “ape” remark from a Collingwood fan at the MCG earlier this season.

The man was immediately removed from the members’ stand at West Lakes, ejected from the stadium and fined by police for making abusive remarks.

The Advertiser understands police action stems from the abusive comments the Crows fan made to the protesting Geelong supporter.

It is understood the remark directed at Varcoe, who was involved in a clash with Crows defender Daniel Talia at the time, was: “Get off him you black pr**k.”

Crows chief operating officer Nigel Smart told The Advertiser the incident remains under investigation because of conflicting reports. But the Crows do have an admission of racial abuse towards Varcoe.

“We have contacted the member, he is an older gentleman and he is upset about it,” said Smart.

“He has admitted to making a remark about Varoce and he is not proud of the fact he did.

“As a club we are making it clear that this is unacceptable and will not be tolerated by the Adelaide Football Club.”

The Crows’ executives expect to decide the fan’s penalty beyond this season on Wednesday after considering a report from the club’s membership department.

“The investigation is continuing and we do have some grey areas because of two versions of the incident,” said Smart.

“Once that is clarified we will be in a position to decide if the man keeps his membership.”