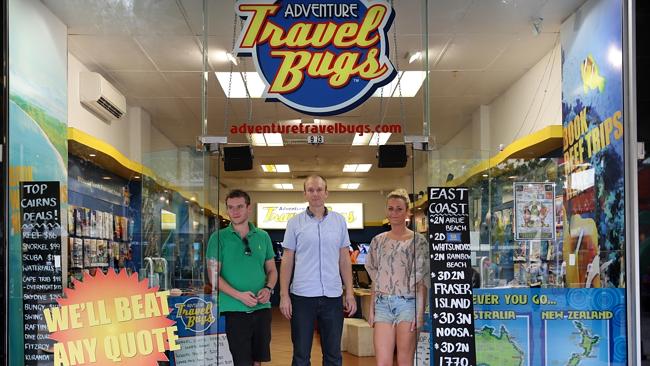 Cairns tourism traders hit back at crackdown on touting for business

TOURISM business owners have hit back at council plans to crack down on touting in the Cairns CBD with one labelling their moves “draconian”.

Touting, which involves face-to-face sales, is not allowed on public land in the Cairns Regional Council area, which includes footpaths outside shopfronts.

But Adventure Travel Bugs owner Phil Bettley said the crackdown was just another hit to local CBD businesses who were already struggling after council banned A-frame signs in Cairns.

“We might as well pull the shutters down now if that’s the way it’s going to be,” Mr ­Bettley said.

“What we would like to know is why the council doesn’t come and talk to us themselves, we’re real people.

OUT WITH THE TOUTS SAYS COUNCIL

“They’ve taken our A-frame signs away so we can’t even ­advertise our wares – it’s ­draconian.”

Destination Cairns ­marketing licensee Jason Blandford told The Cairns Post that he had witnessed aggressive ­touting and called on the ­council to act.

But Mr Bettley said when they did sell from the doorstep it was targeted at holiday-makers, rather than locals. He said a “massive” percentage of their business came from people coming in off the street. “The only people we talk to are backpackers and those who make it on to this street are generally seeking us out (to book tours),” he said.

“Half the industry wouldn’t have jobs if it wasn’t for us selling their tours.

“What’s the point of having this lovely upgraded city with rows of empty shops?”

UK and Ireland tourists, brothers Conor and Jimmy Brailey and friend Daz Tweed, said that they did not mind being approached by the tourist shop touts.

“If you don’t want to do any (of the trips) you just say no. They’re not running after you down the road,” Conor said.

Jimmy said he had previously booked tours with Cairns companies after being approached by touts.

“You expect it don’t you?” he said. “This is that area of Cairns, this is the CBD and all it is (is that) they’re trying to run a business.”