A picture of cross promotion 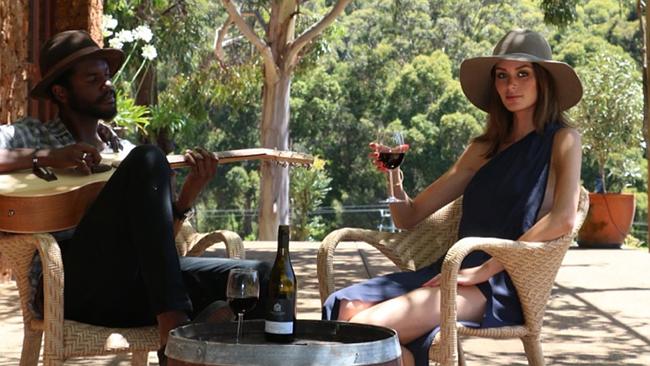 The glamour couple spent Christmas at the luxurious six-bedroom farmhouse Stonebarn Lodge, which overlooks the Warren River in Pemberton, before heading off to see other parts of the state.

As this exclusive picture shows, the American guitarist and Trunfio were loved up as they enjoyed each other’s company and their picturesque surroundings.

Trunfio’s family, including her father Joe who is battling cancer, joined the star couple for Christmas.

“I was trying to serenade her dude – always,” a smitten Clark said yesterday. “She has definitely changed my life for the better.

“We just talk and huge stars fly by. It is inspiring. She is absolutely gorgeous. She is just a sweet, genuine, loving person. She inspires me to be a better man.

The Merredin-born beauty, who now lives in New York, and Clark met through a mutual friend in 2011. Two years on, a friendship has blossomed into love.

“We were both very resistant at first. We never thought it would last but it has worked out for the best,” Trunfio said.

“I have never felt anything like this before. He is the most humble, gentle human being I have met. I have the most respect and love for him. I just admire him. He inspires me and makes me a better person. I just love him lots. And my family loves him.”

Trunfio and Clark will be in WA until January 11. The supermodel is home after landing a role alongside Sam Worthington on his new movie Paper Planes.

Production for the movie, which will be partly shot in WA, begins soon. Trunfio, who plays the role of Worthington’s wife in the film, is yet to meet the West Australian star of Avatar.

Clark, who was named best young gun by Rolling Stone magazine in its Best of Rock issue in 2011, will be recording a new album in the new year and says his time in WA has inspired him to write several songs.

“I’m inspired by what I am seeing here. It is so beautiful here. I don’t know how to describe it – all the stars and the quiet and the kangaroos hopping around and the kookaburras,” he said.

“It’s different being in Australia during Christmas. I’ve been in a T-shirt and shorts. Normally I am all wrapped up. I have been catching marron, which is something new to me, and trying some good Australian wines.

“The only thing I am scared of is getting into the water with sharks. My mum actually sent me a text saying ‘no surfing’.”