A land unaccustomed to art 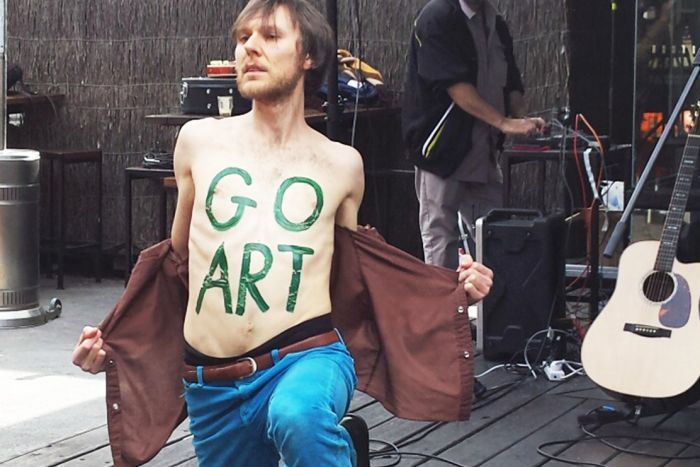 TTN: 16th February 2015: Any progression of arts and artists outside our cities can be a tough road uphill, and as entertainment, hospitality and tourism industries go hand in hand, it’s all of our problem.

In the US and Europe, if you float around long enough, opportunities arise and sooner or later, they’re gangbusters. The Tourism News has a long-term goal of facilitating the transfer of art creation and consumption between Australian regions in order to facilitate the easy transfer of artists, their wares (and therefore tourism) between regions.

Being a professional musician, artist, writer, actor or comedian is a tough gig in Australia. Justin Heazlewood, AKA The Bedroom Philosopher, would know; he’s been from The Hottest 100 to Centrelink and back, and he’s out to share some of the wisdom he picked up along the way.

According to the Australia Council, there are almost 45,000 professional artists in Australia—more than ever before. I’m one of them. I started out in 2002 when I got a foot in the door at Triple J (the charges were later dropped). It led to a weekly songwriting segment and, due to the philosophical nature of my lyrics, I was dubbed The Bedroom Philosopher.

For an only child from Tasmania, it was an atomic blast of adrenalin, validation and hope, the sign from the universe I’d been waiting for. I could make creativity my career, if I wanted.

I’ve spent the past 12 years giving it my best shot. I’ve poured my heart, my soul, my bank account, credit rating, time, ego, mental health, relationships and dignity into the remorseless achievement machine of my micro-business.

In the mad carnival of my life I’ve won prizes, staggered through a house of mirrors and sat alone on the ghost train. I’ve survived a rollercoaster of momentum, with catastrophic highs and dizzying lows. I’ve swung the mallet of my talent and watched the puck sail high, but never quite high enough. On a good day I’m an established musician/writer with a dedicated cult following and the respect of my peers. On a bad day I’m an underrated misfit with a hit-and-miss back catalogue, clutching a showbag of mean tricks. Art as career—it’s the gamble that keeps on gambling.

I represent the category of ‘mid-career artist’. I’ve completed my ‘10-year apprenticeship’ and am now waiting to be employed full-time by my industry. I’m no longer the exciting rising star, nor am I the go-to heritage veteran—I’m embarking on the difficult second act.

In certain circles I’ve Made It! I’m a Success! I’ve been played on Triple J, I’ve been on TV, I’ve supported Amanda Palmer—my head is freaking everywhere—what more could I want?

In outer suburbs I’m ‘tram dude’ or ‘who?’ Mainstream Australia hasn’t really heard of me. It’s not as if I’ve cracked the charts or had my own TV show. I’m a share-household name.

It’s a hell of a conundrum, to have achieved so much yet feel so unsatisfied. It makes one look back, for better or worse. For the first five years I got by on novelty value alone. TripleJ liked my songs. Strangers were emailing me. Girls were interested!

After a lonely childhood, I had personal validation on tap. Sure, I barely knew what I was doing and was so intimidated it burned—but for the most part I was intoxicated by the challenge of it all. When my song ‘I’m So Post Modern’ made it into Triple J’s Hottest 100 of 2005, I was the only independent act to make the list. I was deliriously proud and had a sense of being on track. That wonder-fuel, momentum, was in strong supply.

Over the next five years I derailed. I took myself and the industry too seriously. I let putdowns turn into hang-ups. As my career escalated my ambition mutated into obsession. I was a workaholic, mining my reserves around the clock. Over time my dream job dissolved to reveal a day job, where chasing dreams meant chasing paper (and my tail). As my fame grew, so did my insecurities. I felt guilty for succeeding. I became isolated from my friends. I sensed a backlash from the world, but mostly it came from within.

The more money I made the more everything cost. I was in the middle of an aggressively break-even, high-maintenance machine. I was going from sell-out seasons to Centrelink without a safety net. I’d been doing it all for so long I’d forgotten where the stop button was. I’m not sure one had been designed.

It wasn’t fun any more.

There are so many layers to being an artist, so many centrifugal forces at play. The creative brain is in conflict with the page. The business brain is in conflict with the marketplace. The ego is in conflict with fear, while hope is left to take care of the paperwork. Hope is beautiful, but it has no brain. To be an artist in Australia you have to be savvy, wily and crafty. You have to survive. It’s a desert out there, and the cunning cat catches the scraps. The pursuit of creativity isn’t a rat race but a cat race. It’s little wonder we’re either hissing at one another or curled up in a ball.

For the first time in my career I stood at the doorway, unsure whether I wanted to come in or go out. Frozen with indecision, riddled with bitterness, heavy with poverty, I turned to my first instinct—writing. My creative fabric was in tatters, and only long-form language could sew it back together. I needed to unpack the layers of ceaseless adrenalin and ruthless self-management. I needed to back my memories up to the point where I’d allowed the business of making art to corrupt the art-making itself.

As my fingers traversed the horizon, I realised how often I’d had these conversations with friends. With my partner. With myself. It was time to put this whimsical whinge into doctrine.

Along the way I wanted to check in with other ‘creatives’ to see how they were faring. For years I’d been exiled in my lone wolf ivory tower, clutching my credit cards to my chest. I’d forgotten that everyone, no matter what level, was battling in their own way. Gotye lost creative control of an overseas vinyl pressing and found that it was poorly mastered. Clare Bowditch cancelled a move to Berlin so she could be with her children. My comedy hero, Tony Martin, found himself wondering where the next gig would come from. I wasn’t alone. We are a sky of satellites.

One of the unique aspects of being an artist is how normalised the lack of information is. A career with ASIO would have a more defined path. When I started out I didn’t know what to do, or how to ask for help. My education came through gleaning clues and smacking into walls, confirming my nan’s claim that I’d ‘chosen a very hard path in life’.

In this age of transparency and online knowledge-sharing, more light is being shed on the inner workings of the industry. Knowledge is power and artists need empowering. I’m hoping that Funemployed can fuel the conversation. It’s the kind of thing I would have loved at 23 (though it would have ruined the surprise).

This series is about updating some misconceptions. Musicians who are played on Triple J are rich. Writing for frankie means you attend cool parties. Artists don’t need to be paid because they’re having fun. People assume famous artists are living better lives. (If the grass is greener, it’s probably AstroTurf.)

Australians have a hardwired ‘Hollywood’ idea of fame and fortune, hopelessly at odds with the boutique local scene. Artists become moving targets for the frustrations of the world. Behind the hype and gloss are self-critical battlers, deserving of empathy. Yes, even Sam Simmons.

If someone else can learn from my experiences—my mistakes—then to me it will have really been worth it. If you can gain some appreciation of how artists live their lives, then it will be all the better for the industry. Art is about celebrating life and viewing it from a fresh angle. It’s about turning tragedy into something glorious.

As my writing idol Dave Eggers says, ‘This is like making electricity from dirt; it is almost too good to be believed, that we can make beauty from this stuff.’

Consider this my black box recorder, with jokes.

Excerpt taken from ‘Funemployed: Life as an Artist in Australia’ published by Affirm Press.