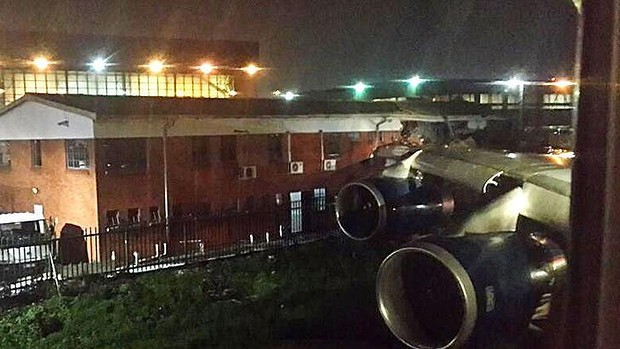 From brisbanetimes.com.au from 24th December 2013

A British Airways jumbo jet carrying 202 passengers and crew has sliced into an office building at Johannesburg’s main airport after following the wrong taxiway prior to take-off for London, injuring four people on the ground.

The Boeing 747-400, with a wingspan of 64 metres, had been instructed to use taxiway B but followed the narrower taxiway M, causing it to impact the offices, where the injuries were caused by debris from the building, South Africa’s Civil Aviation Authority said in a statement today.

A kerosene spill from the fully fuelled jumbo, which would have had thousands of gallons of propellant in its wings, was contained by the airport fire services, and no one aboard was hurt, the authority said. The 747 has been removed from the office block and its flight recorders recovered for analysis.

Paul Hayes, head of safety at London-based aviation consultancy Ascend, said an airliner hits a building once every few years on average, making such incidents less common than plane-to-plane clips, which can happen three times annually.

“It might be that someone has taken a wrong turning, or missed a turning, or followed the wrong taxiway line,” Hayes said of wing clips, adding that “if there is building work and temporary markings, they might not give sufficient clearance.”

The 185 passengers on the BA plane escaped unharmed and were evacuated out of door no. 5, the South African CAA said.

The highest profile wing-clip incident of recent years came at the 2011 Paris Air Show, when an Airbus SAS A380 superjumbo with a 80-metre wingspan grazed an airport building at the Le Bourget airfield and had to be sent home for repairs.

One of the more spectacular incidents also occurred in 2011, when an another A380, operated by Air France, collided with a Delta Air Lines Bombardier CRJ700 while taxiing at New York’s John F. Kennedy International airport.

The superjumbo wing clipped the smaller commuter jet’s tail, whipping it around before the Airbus moved clear. None of the 520 people on A380 or 66 on the Delta flight was hurt.

After the Johannesburg impact, Harriet Tolputt, head of media for development charity Oxfam, who was on the plane, posted a photo showing the wing protruding beyond the perimeter fence and embedded into the second story of the two-story building, having ripped through it for several metres. She said on Twitter that no one was injured, “only the pilot’s pride.”

Three investigators from the South African CAA were on scene to observe the recovery of the aircraft and the removal of its flight recorders, the authority said.

British Airways said the 747 was later moved away from the building. The carrier declined to comment on what caused the jet to be wrongly positioned and said it has started its own investigation and will assist with the safety inquiry.

While BA is drawing down its 747 fleet as it takes delivery of newer models, the plane involved was not one slated for withdrawal and returned from a major maintenance check in Cardiff, Wales, only in September, according to a posting on “The BA Source” website.