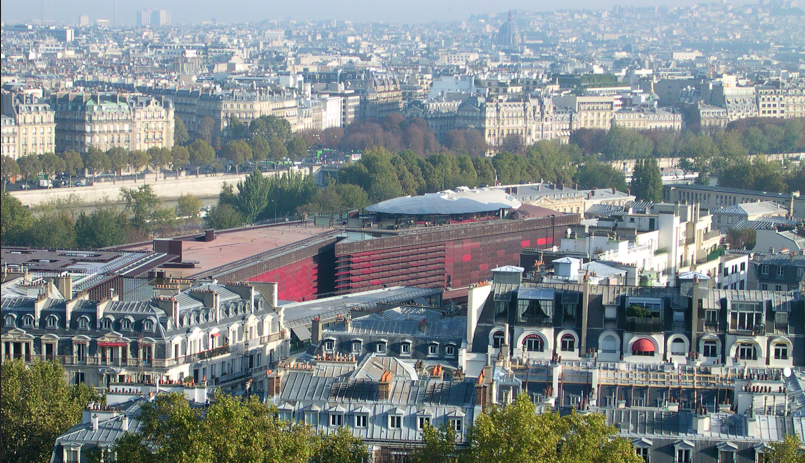 “Aboriginal art is proving to be one of the most in-demand exports from Australia to the cultural centre of France. An ancient culture with very modern currency.” – ABC Reporter Siobhan Heanue

An artwork by a leading Aboriginal artist will soon be viewed by millions of people when it goes on display on the roof of a Paris museum.

Western Australian contemporary artist Lena Nyadbi was commissioned to design a piece specifically for the roof terrace of the Musée du quai Branly.

She came up with a black-and-white painting called Dayiwul Lirlmim, or Barramundi Scales, inspired by her mother’s homeland in Dayiwul Country.

A large-scale reproduction of the work will fill the museum’s 700-square-metre rooftop terrace.

It will even be visible from space, thanks to satellite mapping technology.

The original artwork, painted in charcoal and ochre, will also go on display.

The project was launched at the National Gallery of Australia in Canberra this afternoon, and is due to be unveiled on June 6.

The Musée du quai Branly is dedicated to the arts and cultures of Africa, Asia, Oceania and the Americas and already houses more than 1,400 Aboriginal works.

“People will fall in love with it and it’s going to be very popular I’m sure,” he said.

He says the installation will be viewed by the seven million people who visit the Eiffel Tower every year.

“It is the only museum where one part of the collection is not visible for the people visiting the museum,” he said.

“This powerful new work by Lena Nyadbi is an historic opportunity to highlight and promote Indigenous Australian art and cultures to a global audience in Paris,” he said in a statement.

“Importantly, this commission builds on the success of a project in 2006 with the musée which featured work by eight artists, including Lena Nyadbi, on the ceilings and facade of the museum which attracted the attention of visitors from around the world.”

The project is jointly funded by the Australian Government and through the philanthropic foundation of media buyer Harold Mitchell.

“It’s as contemporary as tomorrow and as ancient as yesterday,” Mr Mitchell said.

The work is in neutral tones of black and white, and tells the dreaming story of an elusive barramundi.

The fish escapes capture, only to scatter his scales across the landscape.

According to the story, these scales became the famous Argyle Diamonds of the Kimberly region.

Lena Nyadbi is a Gija artist from the East Kimberley Region in Western Australia.

She was born around 1936 and began painting in 1998 after a decade-long apprenticeship under several well known Kimberley artists, including Paddy Jaminji.

Her paint is handmade, using natural ochre and charcoal from Gija country, and she is best known for her rich, spare aesthetic.