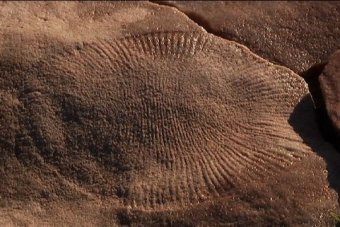 Video: Meet the Fossils (Landline)
Photo: Dr Mary Droser (pictured) has been coming to Nilpena for more than a decade. (ABC)
Map: Blinman 5730

It may have been a pastoral property for 150 years, but long before livestock roamed Nilpena Station west of South Australia’s Flinders Ranges, it was home to an array of ancient creatures that scientists say mark the dawn of animal life.

Each year leading US geologist Dr Mary Droser, from the University of California, swaps the big city for the SA bush to study what has been left behind – ediacara fossils which she says date back at least 550 million years.

“There is this group of fossils that occurs before things have skeletons, and there are these soft-bodied organisms that lived for 40 million years, and this is their fossil record,” Dr Droser told ABC’s Landline.

“So it’s Earth’s oldest animal ecosystem and Australia has the best record.”

Dr Droser has been making the annual pilgrimage to the station, around 500 kilometres north of Adelaide, for more than a decade, along with her two children and mother.

“My first day here I’m always up at like five because I can’t get out here fast enough,” said the geologist as she surveyed the fossil field at the start of this year’s trip.

“I get excited months leading up to even coming here and once I’m here I can barely stand it.”

Photo: The dickinsonia fossil, a poster child for ediacara fossils at Nilpena. (ABC)

While it might be a world away from their Californian and New York bases, the family considers the station’s rustic shearers quarters their second home.

“It’s not really luxurious, but it gives you the outback feel,” said Dr Droser’s 13-year-old son Ian Hughes, who has spent all his birthdays but one at Nilpena.

“Coming here is like my big birthday present. It’s fantastic.

“It’s so beautiful. There’s always so much to do. You can hike, you can look for fossils … it’s just so much fun.”

Ross Fargher, who runs Nilpena, discovered the fossil site in the mid-1980s on the side of a hill, not far from the shearer’s quarters.

While the cattle station is on what is considered marginal country, scientists say the organisms that left the imprints in the rocks were actually marine animals.

“All this country was underwater,” Mr Fargher said.

“It’s pretty hard to get your head around.”

The same types of fossils were first found by renowned Australian geologist Reg Sprigg in 1946 on another part of Nilpena called Ediacara Hills, so the era when these ancient organisms existed is known as the Ediacaran Period.

Photo: Spriggina – the fossil named after Reg Sprigg who originally discovered these types of fossils in the Nilpena region in 1946. (ABC)

There are several notable ediacara fossil fields in the world, but Dr Mary Droser says the one she works on at Nilpena is a stand-out.

“You go to Namibia and you get certain types of fossils that are thought to be younger than this and Newfoundland you get ones that are dated older than this,” she said.

“So we actually have everything and there’s no site that has all of these things. It’s really absolutely extraordinary.”

The geologist and her team of researchers from the US – along with experts from the South Australian Museum – have identified about 40 different kinds of animals in the rocks.

Among them are same-sized tubular fossils, found in packs, which she says are the first evidence of animal sexual interaction.

“When you say that people immediately think there’s a male and a female and you caught them in the act and it’s not really that.” Dr Droser said.

“What we catch here is the product of the sexual reproduction.”

She named the species Funisia Dorothea after her 87-year-old mother, who does a lot of the support work for the team, including the cooking.

“Obviously I believe in procreation or something … I have 11 grandchildren,” Dorothy Droser said.

“I’m proud. I think it’s great. It’s a great find to find out the first sexual and asexual activity on Earth… isn’t that impressive?”

As well as well known ediacara fossils like dickinsonia and spriggina, the site also contains the world’s largest aspidella and tracks from tiny but significant bilaterian animals.

“It’s not necessarily our ancestors but our first cousins.”

The contribution of Ross Fargher and his station were also recently recognised in stone, with the naming of a new fossil, nilpenia rossi.

“It probably looks a little bit like a mop or something with all these tentacle type things running in all different directions, but quite impressive to see,” Mr Fargher said.

Nilpena’s fossil field, which is not open to the general public, is one of only a handful of National Heritage Sites in South Australia.

Among scientists and evolutionists the site is recognised as an international treasure.

Indeed, NASA has funded some of Dr Droser’s work in the hope that it sheds light on how life evolves on other planets.

It is work she says has only just begun.

“Sometimes I scratch my head and think ‘oh my gosh my life isn’t long enough’,” the geologist said.

“I think we’re the tip of the iceberg here and many generations after us will be coming here and working on these, that’s our hope.”