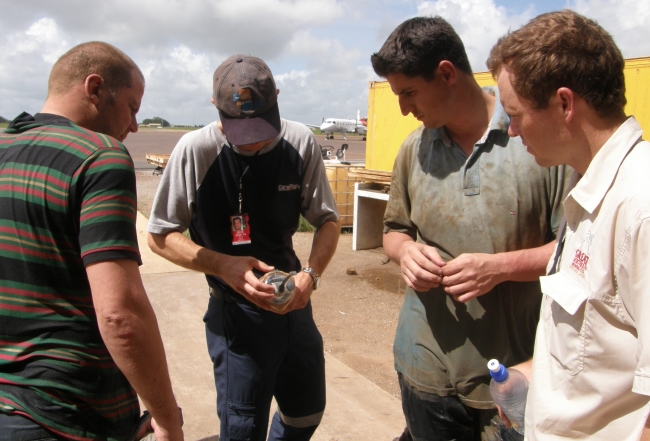 FOUR mud crab fishermen have been rescued from Darwin Harbour after spending a night lost in the mangroves.

One of the men – who declined to be named – described seeing a large crocodlile nearby as they swam to the mangroves after the capsize.

“It had seen us but didn’t attack,” he said. “At night we climbed into bigger trees to try to be safer and we heard things swimming around us in the dark.”

Only when the tide dropped this morning (Monday) did they feel it was safe to get back in the water and retrieve packs from the upturned five-metre boat and locate a distress beacon.

The Australian Maritime Safety Authority (AMSA) received the signal via satellite and called out a police launch, a helicopter from charter company Jayrow and Darwin’s CareFlight shortly before 8.30am.

CareFlight winched the four to safety and flew them to a sandbar.

The Jayrow crew flew three of the men, and CareFlight the fourth, back to Darwin Airport where they deactivated the beacon.

The men’s arms and legs were covered in sandfly and mosquito bites but, apart from lack of sleep and suffering dehydration, they were unharmed.

“It was a horrible experience,” one of the men said to his helicopter rescuers as he tried to wash off thick mud. But he described the sound, then sight of the helicopter as “just beautiful”.

The men said they saw some aircraft flying high over their location earlier this morning and set off flares, but were not seen.

Police and CareFlight said but for the Emergency Position Indicating Radio Beacon (EPIRB) the men would not have survived their ordeal. Although it is not compulsary to carry an EPIRB in harbour waters, CareFlight urges boaters to carry one on all outings, and have it in an accessible location.

Embarrassed by their capsize the three men with Mr Muller asked to remain anonymous, saying they had come to Darwin three months ago for a bit of adventure.

All four rescued men vowed to give it a while before they went fishing again and will help to try to recover the tinny which they borrowed from a mate for the outing.