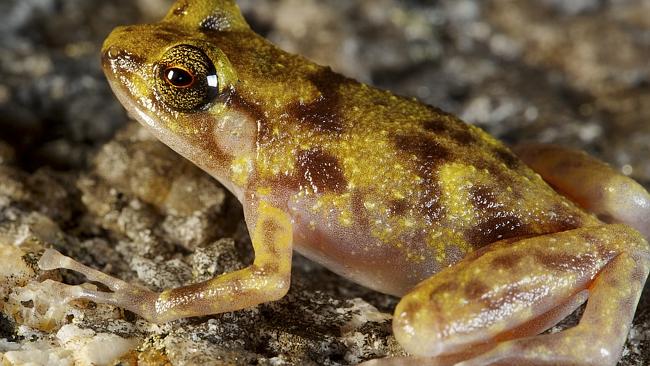 A LOST world of new species has been discovered in a grove of remote Cape York rainforest perched atop a mountain range of giant boulders.

What he – and a team from National Geographic – uncovered once dropped by helicopter on top of the bus-sized black granite boulders surprised even the experienced scientist.

Within four days, Dr Hoskin had found three creatures previously unknown to science: a long, camouflaged gecko with a tail like a leaf; a golden skink; and a tiny rock-loving frog.

“It was like walking into a whole new world,” the biologist told The Australian after his find was published in the international journal Zootaxa this month.

“This is a truly wild place, so hard to get to, on an amazing misty plateau of rainforest on top of large black boulder fields.”

“It’s protected by the boulder fields, which keep fire out and moisture in, which is quite conducive to hanging on to some really interesting rainforest creatures through time,” he said.

For Dr Hoskin, they are “dramatic new species”.

Patrick Couper, the Queensland Museum’s curator of reptiles and frogs, said the discovery of the gecko was extraordinary.

“The Cape Melville leaf-tailed gecko is the strangest new species to come across my desk in 26 years working as a professional herpetologist,” Dr Couper said.

“I doubt that another new reptile of this size (20cm long) and distinctiveness will be found in a hurry, if ever again, in Australia.”

The Cape Melville shade skink, a golden-coloured skink, is awake during the day and leaps across the boulders hunting insects, while the blotched boulder-frog feeds and breeds in the rain during the summer wet season.

The frog’s tadpoles develop inside its eggs once laid. When the eggs hatch, a fully formed froglet hops out.

Dr Hoskin is planning another, longer, expedition to the Cape Melville range soon. “There’ll be more new species to find, for sure.”