Bon Jovi getting butts on seats with $35 ticket release 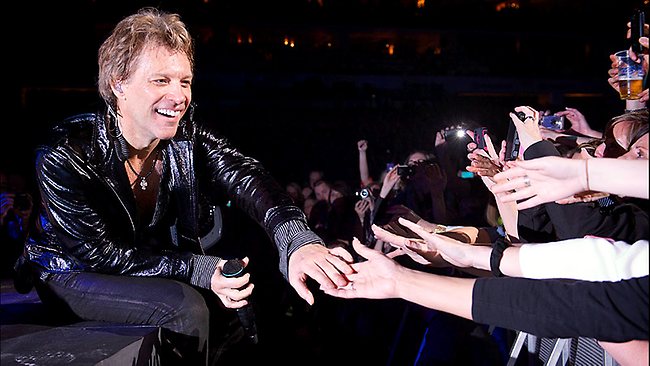 BON Jovi are rewarding loyal Australian fans with a discounted $35 ticket for their summer stadium tour.

Promoter Paul Dainty said Jon Bon Jovi insisted that “thousands” of the cheaper tickets be made available for the outdoor concerts in December so fans struggling to make ends meet could still enjoy the state-of-the-art rock show.

“The band did the same thing when they announced their European dates and got a huge reaction,” Mr Dainty said.

“Everyone is suffering a bit from the economic doom and gloom perceptions and the band want to help out, give people a great start to their Christmas celebrations.”

The other pricing packages are still being finalised but the $35 tickets are expected to be snapped up quickly when they go on sale on May 20. Mr Dainty said they won’t just be nosebleed seats, with some equivalent to the $160 seats at the Eminem concerts held at similar venues in 2011.

“It is important to point out that there will be regular ticket prices as well but there will be thousands of these tickets dotted around the stadium and available to the general public,” he said.

Mr Dainty believes other artists and promoters in Australia will follow Bon Jovi’s lead on their Because We Can tour this year both to sell out concerts quickly and give music fans greater choice.

Australians have historically paid more than American and European music fans due to the high costs of freighting big productions here and the fluctuating fortunes of the dollar.

Concertgoers were also forced to adopt tiered ticket pricing – more expensive for the front rows and meet-and-greet packages, slightly less for the back rows  – when promoters sought to offset their costs in the past two decades.

But artists are leading the charge towards a lower-priced ticket so all fans have a chance to see them live.

Lady Gaga offered her Little Monsters an $80 ticket, One Direction’s cheapest seat was $72 and The Janoskians are charging $40 plus booking fees for their upcoming national tour.

“I think we will see more of it because ticket pricing has become an important issue,” Mr Dainty said.

“When you have a band like Bon Jovi, who had the highest grossing tour in the world in 2010, doing this, others will naturally try to emulate it.

“We are announcing this from day 1, not late in the day because we still have tickets up the back.”

General public tickets go on sale from noon on May 20.

Richie Sambora has taken a sabbatical from the band’s world tour and it is not known if he will rejoin them for the Australian leg.