20yo ride worker crushed to death at primary school 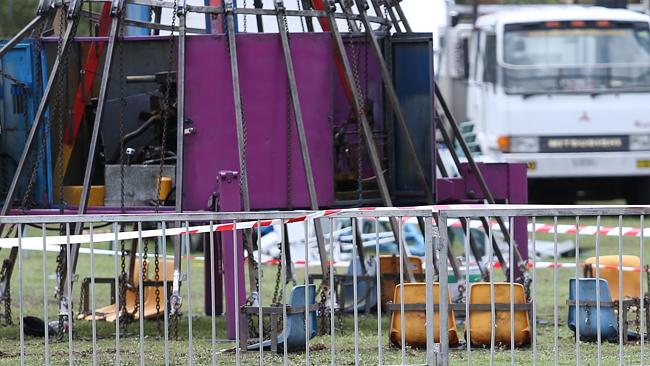 TTN Summary: A 20 year-old show ride worker has been crushed to death as he attempted to dismantle a show ride at an Ipswich primary school after a Carols By Candlelight event. The man was still alive when paramedics reached him.

A 20-YEAR-OLD man has been crushed to death while dismantling a merry-go-round at a Carols by Candlelight event in Ipswich.

The death of the Loganlea man is being investigated by Workplace Health and Safety.

A Queensland Police spokesman said the man was dismantling the chainlink merry-go-round just after 9pm when the accident occurred. The sceneat Collingwood Park State School where a 20yr old man was crushed to death trying to dissemble a ride. Picture: Jack Tran / The Courier Mail

“A male person was dismantling a ride from a fair, it appears as though a ramrod beam has given away, whilst he was dismantling it and it’s crushed him,” the spokesman said.

“It was a merry-go-round with a chain and a swing on it, it had been partially dissembled and he was in the process of pulling the rest of it down.

“His injuries were severe and tragically as a result of his injuries he passed away while still on scene,” Chief Sup Hebbron said. “It was extremely difficult (to treat the man) he was pinned at the top of the ride, so extrication was quite difficult, ambulance and police and fire all worked exceptionally well in difficult circumstances.

“On a arrival the young man did have some vital signs which were very faint and he did pass away a short time after us arriving.”