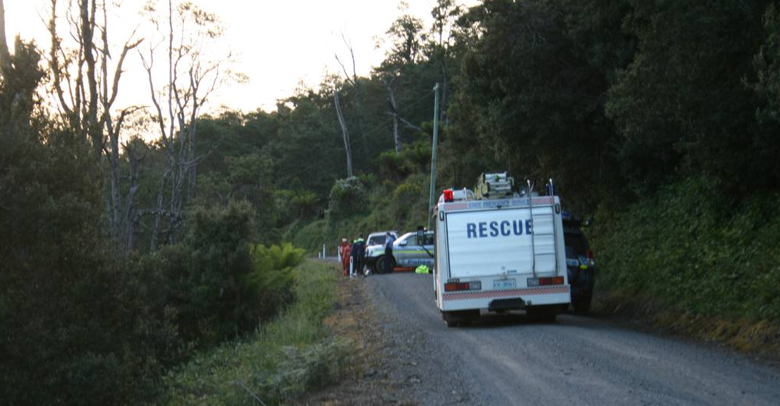 The 18-year-old woman, a vehicle passenger, was visiting Tasmania with the driver, a 20-year-old German man, who escaped before the vehicle went over the edge of the road at 3.30pm yesterday.

Police arrived to find the man injured beside the road and his vehicle, a Mitsubishi Delicia 4WD van, 25 metres down an embankment, resting upside down on a tree just above the Leven River.

It is believed the driver lost control of the vehicle on the dirt surface at Loongana.

The driver had minor injuries and was taken to North West Regional Hospital.

Police and the State Emergency Service arrived to clear the scene and retrieve the woman’s body.

The road was closed for more than an hour.

Police said the road was only just wide enough for two vehicles to pass and it appeared the driver lost control of the vehicle, crossing onto the incorrect side of the road.

He then appeared to have attempted to regain control, however it rolled off the side of the road and down towards the river, police report.

Inspector Kim Steven said it was a difficult operation.

“It’s the last thing we want when people are on holidays,” Inspector Steven said.

The road was dry and weather was fine and clear at the time of the crash.

It was the first road death in Tasmania this Christmas season.

A coronial inquest has opened into the matter.

Police have not released any names until the next of kin have been notified.

Crash investigators would like to speak with anyone who saw the vehicle in the area to contact Burnie Police Station on (03) 6434 5211.

The body of a German tourist has been pulled from a car found upside down in a tree after a dramatic crash in Tasmania’s north-west.

Police say it appears the man lost control of the van, which veered across the road and rolled off the side of an embankment.

Officers arrived to find the van suspended upside down in a tree, hanging over the Leven River.

The woman’s body was trapped in the wreckage.

Crash investigators and rescue personnel worked in tricky terrain to recover the woman and a coronial inquest into the accident has begun.

Police say weather conditions were fine and clear at the time of the crash and the gravel road was dry.

Crash investigators want to speak with anyone who saw the van in the area.