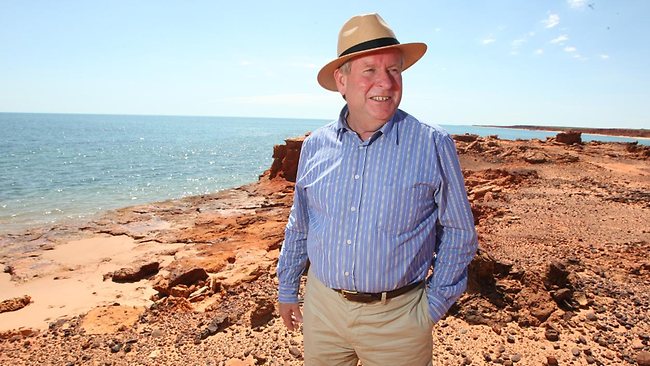 Locals, environmentalists and Australian Greens leader Christine Milne have all condemned the granting of Woodside’s application under the state’s Aboriginal Heritage Act, which allows work in sand dunes at Walmadany.

As far back as 1989, the state’s Department of Aboriginal Sites identified the site as an area of “major” heritage significance, dense with archaeological material, including hearths and bone remains.

The area was controversially described as an “unremarkable beach” by Premier Colin Barnett in 2010.

Indigenous Affairs Minister Peter Collier confirmed today that Woodside could work in the area, after an application hearing in late December.

“The minister has agreed with a recommendation from the Department of Indigenous Affair’s Aboriginal Cultural Material Committee (ACMC) that section 18 approval be granted for site investigation activities associated with the development of the Browse LNG precinct,” a spokesperson for Mr Collier said.

It is understood the application has been granted on the condition local elders be present to monitor the work.

“I’m shocked that the West Australian government is allowing such destructive acts to happen,” she said.

“Tony Burke has to step in immediately to protect this priceless heritage.”

Locals from the No Gas campaign said the sand dunes and monsoon vine thickets at James Price Point had been recommended for protection by the WA Environmental Protection Authority twice in the past 20 years, but were now deemed suitable for Woodside works.

“The Aboriginal Cultural Material Committee accepted it then. It has been ignored by the minister now. They are trying to rewrite history,” said Phillip Roe, law boss of the Goolarabooloo people.

Wilderness Society spokesman Glen Klatovsky likened the decision to allowing bulldozers into the graveyard of St George’s Cathedral in Perth.

Woodside said they intended to work closely with traditional owners in the area.

“Woodside welcomes the minister’s approval under section 18 of the WA Aboriginal Heritage Act to undertake a limited range of engineering and environmental studies in a small area south of James Price Point that is known to contain indigenous heritage sites,” a Woodside spokesman said.

“Woodside is working closely with traditional owners to identify and carefully manage Aboriginal culture and heritage at the site of the proposed Browse LNG precinct.

“In executing this work Woodside will avoid sites where possible, or minimise any disturbance to them.

“All activities in this area will be closely monitored by traditional owner representatives and will be conducted under a cultural heritage management plan.”

Legal action is already looming over the environmental approval process for the proposed gas hub.

The EPA report that recommended Mr Marmion’s approval was done by one person – EPA chairman Paul Vogel – after four other board members had to stand aside because of conflicts of interest.

Yesterday Mr Barnett moved to assure international visitors the Kimberley would not become industrialised, after the New York Times named the area as one of its top places to visit in 2013.

“There has been a lot of debate about James Price Point. I understand that and I respect people’s point of view,” Mr Barnett said.

Locals will hold a vigil outside the Woodside offices in Broome on Tuesday to protest the decision.