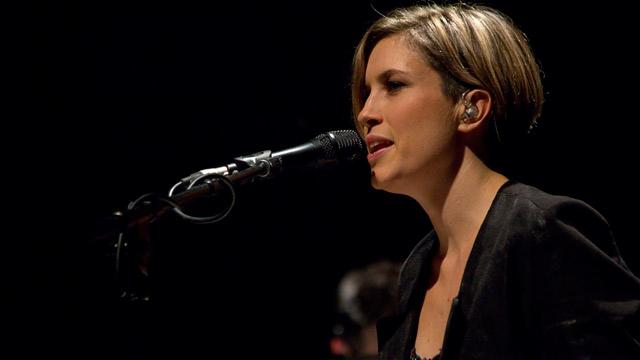 Singer Missy Higgins has taken to Facebook to rant against Qantas’ vegetarian meal options, writing that vegetarians are not “granted respect” and “even the slightest consideration in the taste department” after a flight with the airline.

In upper case letters, Higgins wrote that “two pieces of dry bread with a limp piece of lettuce, two slices of old raw capsicum, a measly piece of cucumber and three slithers (sic) of dry carrot does not a sandwich maketh”.

The singer was also disappointed with the lack of “butter, margarine, chutney, cheese or mustard” on her sandwiches.

The post, which attracted over 7600 ‘likes’ and 1300 comments, had fans divided about the quality of the star’s arguments against the meals, with many congratulating Higgins for her bravery and others commenting on the “pointlessness” of her ‘essay”.

She took particular offence at the lack of available vegetarian options, writing that vegetarians “don’t deserve to punished for not wanting to eat something that has mostly…spent the entirety of its life in a cage”.

“Shouldn’t we be granted respect? And at the very least be served an alternative meal that has been given even the slightest bit of consideration in the taste department?” she asked.

The post, which was addressed to the “Qantas food department”, acknowledged that typical open letters from celebrities addressed more serious issues.

“While most celebrities are writing open letters to each other about such important issues as gender equality, racism and cultural appropriation, I’m writing to you from the comfy seat of my Qantas flight from Alice Springs to Melbourne, about something dear to me heart: margarine,” she wrote.

Higgins said in the post that she had Gold Frequent Flyer status with the airline, which placed her at the front of the economy cabin.

While many of the comments supported Higgins’ post, writing words of encouragement such as “You go, girl!!”, “Whoa, you go Missy!” and “Here here!!! Love this letter – good for u, missy!!”, others were less than impressed.

Steve Rabbitt asked: “Is this your biggest problem today, a crappy sandwich whilst sitting in the business/ first class on a Qantas flight…Hate to see what problems you have on a slow day!”, and John Mead said to “grow up, it’s an airline, not a restaurant”.

A Qantas representative replied promptly, and said the company appreciated the singer’s feedback.

“Hi Missy. We would like all our customers – vegetarian, carnivorous and everyone in between – to be happy with the refreshment/ meal they receive on their flight. We can appreciate that vegetarians do have taste buds, and will pass this onto our menu planners as an insight. Thank you for passing this on, appreciate your feedback.”

A mollified Higgins thanked Qantas for the reply, and sent love to all those who commented on her post, “including those obviously having a bad day”.

She later posted this story to her Facebook page stating she was “having a laugh people! Not a rant! Grow a sense of humour!”.

Meals have become a battleground for airlines in recent years, with many carriers signing up celebrity chefs to come up with menus or lend their name to the brand.

On Monday, Virgin Australia surprised passengers by having chef Luke Mangan and his team serve high tea on a Sydney-Perth flight.

Qantas, which has a long-standing relationship with Neil Perry, recently introduced ‘pop-up’ restaurants at airports across Australia featuring food from different high-profile restaurants and chefs.