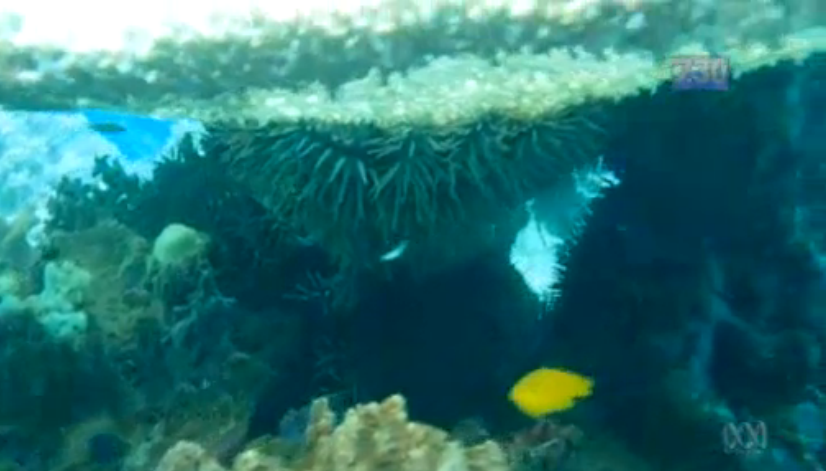 From abc.net.au and video report from the ABC’s 7.30

Scientists are worried the Great Barrier Reef is on the verge of being hit by the most damaging crown of thorns starfish outbreak on record.

Sections of the reef between Cooktown and Cairns are already in the grip of an outbreak, the fourth recorded since the 1960s.

“At the moment the crown of thorns are still ramping up in numbers,” said Col McKenzie, who heads the Association of Marine Park Tourism Operators (AMPTO).

“I would expect it would be 12 months before we’ll see a full-on outbreak off Cairns.”

Scientists say the growing plague, which comprises at least a million starfish over hundreds of kilometres, is steadily moving south with the ocean current.

“We’re certainly getting numbers far above what have been recorded before.

“I think we’re going to start seeing large numbers off Townsville and off the Whitsundays in the not-too-distant future.”

Crown of thorns starfish are a native species, and Professor Peter Doherty from the Australian Institute of Marine Science says there is evidence these starfish outbreaks are partly a natural phenomenon.

“[The starfish] is virtually a pile of skin and spines overlying gonads that are very well equipped to find and feed on coral,” he said.

“It is a species that sooner or later is primed to outbreak in very large numbers.”

Outbreaks may be worsened by human activity

Nonetheless, there is little doubt the severity and arguably the frequency of these outbreaks has been caused by human activity.

The most widely accepted theory is that the plagues are being given a boost by run-off from fertilisers.

[The starfish] is virtually a pile of skin and spines overlying gonads that are very well equipped to find and feed on coral.

“They promote intense plankton blooms that increase the size of the plant cells and provide perfect feeding conditions for the starfish and a combination of that is suddenly an explosive increase in the numbers of starfish.”

Professor Pratchett does not completely accept that theory.

“I’d say there is no single hypothesis that has universal support, and there’s likely to be many different causes or factors that contribute to crown of thorns starfish,” he said.

But while scientists still debate the exact cause of the outbreaks, they all agree that poor water quality, particularly agricultural run-off, exacerbates the problem.

Crown of thorns a key threat to reef

The Federal Government’s recently released strategic assessment of the reef lists both crown of thorns and run-off as two of the biggest threats to the reef.

In fact, crown of thorns starfish, according to a recent AIMs study, is responsible for more than 40 per cent of coral loss over the past 27 years.

What is particularly worrying about this current outbreak is the fact that the reef is also already highly stressed.

We had a whole series of very severe cyclones which have already depressed coral cover and these crown of thorn outbreaks on top of that will really destroy what coral cover is left.

“This is a very bad time to have a major outbreak of crown of thorn starfish,” Professor Pratchett said.

“We had a whole series of very severe cyclones which have already depressed coral cover and these crown of thorn outbreaks on top of that will really destroy what coral cover is left.”

Professor Doherty says the reef is at its lowest point since widespread monitoring began 30 years ago.

“Clearly the impact of the crown of thorns starfish is one of considerable concern because these animals are very good at finding and feeding on the last remaining corals,” he said.

One recent breakthrough in the fight against the starfish is the development this year of new single-shot poison.

“It’s probably the most exciting innovation in crown of thorns control anywhere in the world,” said Mr McKenzie, who also oversees an eradication project funded by the Federal and Queensland governments.

“The reality is that before the single-shot injection, it was taking us on average six minutes per crown of thorns because we had to inject the bell of the crown of thorns five times and every single arm.

The one shot will not prevent or stop an active outbreak of crown of thorn starfish. It’s just too big, it’s a tsunami.

The programs have succeeded in keeping the starfish off reefs visited by tourists, and is greatly welcomed by the $5 billion tourism industry.

But eradications programs are fundamentally cosmetic.

“The one shot will not prevent or stop an active outbreak of crown of thorn starfish,” said Nick Heath from the World Wildlife Fund.

“It’s just too big, it’s a tsunami, and no amount of human endeavour could prevent a crown of thorns outbreak.”

Professor Doherty agrees, saying: “I think the reality of being able to find and kill enough starfish at that scale is actually a pretty improbable outcome.”

There is consensus that a long-term solution has to involve improvement in water quality and continued efforts to reduce agricultural run off.

“The leading farmers are showing the way,” Mr Heath said.

“We can reduce fertiliser pollution of the reef, but unfortunately the adoption of those practices across the industry is currently insufficient.”