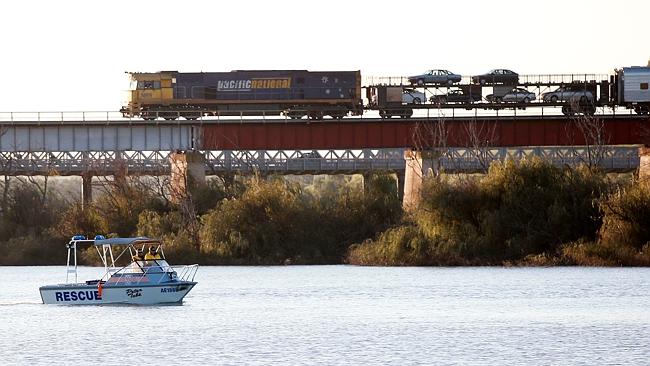 A MAN has died and another has been flown to Royal Adelaide Hospital after a ski boat smashed into a tree and caught fire during the SA Ski Racing state titles at Murray Bridge on Saturday afternoon.

Ambulance crews and firefighters were called to Sturt Reserve just before 2pm after the boat crashed into a clump of trees growing in a river channel about 20 metres from the eastern bank.

An SA Ambulance spokeswoman said one man had suffered a heart attack and died.

The other man, who was piloting the boat, sustained widespread burns to his body, however, the spokeswoman said the burns were not life-threatening.

The vessel has partially submerged.

Police Sergeant Bob Petersen said the men – both aged 57 and from Victoria – were involved in the ski carnival when their inboard motor boat developed problems.

“It (the boat) has gone off course and unfortunately crashed into a willow tree where it has become alight,” he said. “As a result of that the observer, aged in his 50s, from Victoria, has passed away.

“It’s absolutely tragic circumstances for the family, for the fellow competitors and for everyone involved.”

The cause of the crash is still unclear.

“Fire technical officers will have a look at the boat to see if there was a problem,” Sgt Petersen said. “The actual cause is still under investigation.”

Rescue crews were attempting to retrieve the boat.

Ski Racing SA president Graeme Stegmeyer declined to comment on the crash but said counsellors had been organised.

Ski Racing Australia’s national officials will fly into Adelaide on Saturday night and are expected to make a statement on Sunday, Mr Stegmeyer said.

“We treat this sort of thing very seriously,’’ he said.

The carnival was cancelled after the crash and officials will decide later if it will continue on Sunday.