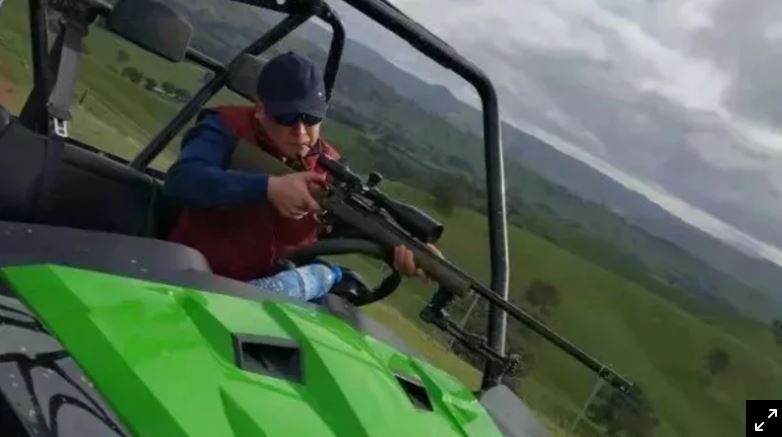 At a glance, it could seem a familiar case of residents versus Big Development, a hyper-local tension of coffee shop chatter that any small-town council might expect to work through now and then.

Now the 18-month fight by Murrindindi residents against a hotel development at the foot of Victoria’s high country has become embroiled in a corporate scandal of epic proportions.

It features a shadowy international fugitive known as “Mr Chinatown”.

Then there’s the black-windowed SUVs idling, lost, up residents’ driveways.

Throw in some high-rolling Chinese gamblers, links to Crown casino and, for good measure, advertisements in Chinese offering to make guests a “crack-shot hunting god” on the trail of that great Australian game, the wombat.

In 2016 a private jet was searched by law enforcement on the tarmac of Coolangatta airport. It’s passengers were worth billions each, and each held secrets precious to Crown casino.

As residents absorbed the explosive revelations over the past week in The Age, Sydney Morning Herald and 60 Minutes of unsavoury dealings of Melbourne’s Crown casino and its partners, it became apparent the local grievance in their once-sleepy valley was in fact wrapped in international intrigue.

To the residents, it’s all starting to make sense.

They agreed to meet The Sunday Age at a home adjacent to ‘Balaclava’, a sprawling cattle station once owned by major-general John Gellibrand. (He died there in 1945.)

The drive to the property, near the rural town of Yea and about 100 kilometres north-east of Melbourne, passes green hills peppered with cows, sheep, horses and bursts of yellow wattle.

Fog rather than smog rises with the sun and kookaburras perch on the eucalypts. It is the antithesis of Melbourne or Macau.

Residents say they knew something was up at Balaclava the moment a man with an interpreter and expensive watch arrived early last year and said he was going to “make the (dirt) road black”.

At about the same time, gunfire – including from high-calibre rifles – began sounding incessantly from the property at all hours.

Strange deer with yellow tags in their ears began turning up on roads, in vineyards and backyards.

One of the “more astute” members of the residents’ group soon found a website in Chinese that provided some answers.

“It doesn’t matter if you don’t have any hunting experience, through the guidance of our experts you are sure to become a crack-shot hunting god,” reads The Sunday Age‘s translation of the website.

“Wild rabbits, foxes, wombats, wild ducks, red deer and sambars … a variety of wild animals will accompany you on your happy vacation.”

It boasts the “full range of equipment, from the double-barrelled shotgun … to the large-calibre sniper rifle”, sure to “meet the requirements of military fans”.

It sent heads whirring: who was the inheritor of Gellibrand’s Balaclava and what was going on?

In February last year, about the same time the shooting began, about 100 people showed up at the local community hub to learn about a development application with Murrindindi Shire Council for a two-storey, 45-room hotel and function centre on Balaclava.

The original plans submitted with the application featured a “shooting facility” and helipad (both since removed) along with two function rooms, multimedia rooms and “play” areas. That didn’t go down well.

“So, we knew there was going to be noise pollution, we knew that there’s idiots running around with high-powered rifles … Then, bang, up comes the article in The Age.”

He is referring to the revelation last week that Balaclava had been snapped up for $7.5 million by Tom Zhou, an international fugitive and Crown Casino royalty.

There, published for everyone to see, were the familiar Balaclava gates and the long driveway lined with pines. There, on the TV, was the undercover reporter on the property being told it was “no worries” to take shots at the wombats.

The exposé was something of a lightbulb moment, “or floodlight moment”, said one of the residents, who asked not to be named.

Lindsay Mates, who shares the property where the group gathered this week, says dark SUVs still mistake his modest driveway for the far grander entrance to Balaclava.

“Of course we tell them it’s the opposite direction, but they eventually find it,” he said.

Mr Mates said the noise from the guns sometimes got so loud it “almost quakes” the creek separating his paddock from Balaclava.

“My wife yelled out to a young guy across the river and to his credit he came down,” he said.

“My wife told him, ‘The shooting is really, really loud and it needs to stop’. He said, ‘Do you want some earmuffs’.”

The offer was rebuffed.

One resident said dogs from Balaclava killed three of his chooks. Soon after that incident, a bottle of Penfolds wine – “not the expensive one” – appeared on his doorstep. Another resident also received a bottle, which she re-gifted.

It is illegal to kill, take, control or harm wildlife under the Wildlife Act, but it is unknown what, if anything, has actually been shot, or if the shooters have obtained correct firearm and hunting permits. Victoria Police and the Department of Environment, Land, Water and Planning are investigating.

Meanwhile, the residents are turning their attention to the plans for the hotel and function centre. It is being developed by a man called Mr Wu, who did not respond to attempts to contact him. The Sunday Age does not suggest any wrongdoing on his part.

Mr Wu’s architect, Alvin Xu, said he could not comment about the guns and hunting, but confirmed the total footprint of the hotel had now been scaled down by more than a third, the result of various reports and studies.

But residents still worry that features such as the shooting facility will return over time, and in stages, if the application is approved by councillors.

“It has an impact on everyone’s lives,” resident Ryan Macwhirter said. “You sit here and you go ‘How beautiful is this? How quiet and peaceful?’ But as soon as they start shooting it’s destroyed.”

Another man has put off renovations because he believes a large, bright hotel in the valley would destroy everything that made him want to retire there in the first place.

Residents have written to Victorian Planning Minister Richard Wynne and Murrindindi Shire Council with their concerns about noise, traffic, waste, lighting, power and water. Since learning more about Balaclava’s owner, they have written again to include concerns about his character.

Mr Xu said the newest development application addressed all their concerns and would be a boon for the local economy and tourism mix.

Murrindindi Shire Council, which will advertise the plans in a matter of weeks, said it was following the process set out in legislation. Mr Wynne said the process was a matter for the shire.