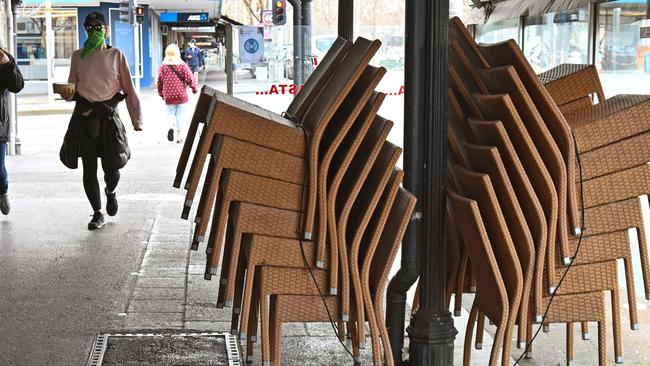 Economics reporter Alan Kohler speculates about the sustainability of hospitality jobs, including delivery services well below the minimum wage.

The lack of delivery services can be somewhat contributed to the Australian minimum wage. Kohler below speculates about how his delivery person, via UberEats or Deliveroo, would be expected to earn only $4.99 per delivery.

The federal government’s JobMaker program and various traineeship supports were announced in the early October 2020 budget, a budget that was set aside (usually in May each year) in order to assess the damage to the industry and consider which programs might supplement the industry best long-term.

Controversially, the 20 hour per-week positions are also particularly female-friendly in that part-time positions are in hot demand; and it is females demanding them.

Some food for thought on the restaurant rout: 150,000 jobs in doubt

Don’t, for a moment, think the labour market is picking up, or in anything approaching good shape: August’s 111,000 lift in jobs and fall in unemployment from 7.5 to 6.8 per cent revealed by the ABS on Thursday were, to put it mildly, horse manure for the garden.

So there was actually a fall in the number of jobs and an increase only in the number of people working for themselves. Who are they? That’s not revealed, but they’re food deliverers of course — UberEats, Deliveroo, Providore etc.

There’s a lot more food delivery going on at the moment, but it’s terrible work and they’re doing it out of desperation, not choice.

It explains why hours worked in August only rose 0.1 per cent when employment rose 0.9 per cent. Not only do they work fewer hours than employees, they get paid less for the hours they do drive, or pedal.

We got UberEats on Thursday night as it happens, and if I hadn’t tipped the guy in the Camry 10 per cent Uber would have got $4.99 for the delivery. I don’t know how much of that went to Sajitha.

From the time he got to the restaurant to pick up the food and arrive at our door, it took half an hour. Even if he got all of the $4.99, which he wouldn’t, and he did two of those per hour, every hour, every shift, which he couldn’t, he would be getting exactly half the minimum wage.

Worker by any definition

But it’s all right because he’s not an employee, and it’s not a wage — he’s what the ABS, and presumably the Fair Work Commission, calls an “owner-manager without employees, working in an unincorporated enterprise”.

Would we pay $20-$25 for delivery of a $50 meal, which is what it would have to be if our delivery guy was to be actually employed by Uber, or by the restaurant? Definitely not.

In other words, it’s both a travesty and unsustainable, or at least it shouldn’t be sustained.

Worse than that, it’s possible that the restaurant industry itself has become unsustainable, partly as a result of delivery.

In a normal year, which is more or less anything other than this year, 18 per cent of Australia’s restaurants close and another 20 per cent of the total open, so there is usually a steady 2 per cent annual growth in the number of places, although that has been trending down towards 1 per cent in recent years as saturation approaches.

The CEO of the Restaurant and Catering Association, Wes Lambert, told me this week that he thinks that in 2020, it will be 5 per cent opening and 25-30 per cent closing, so a net loss of 20-25 per cent — nationally, that is, more in Melbourne.

According to the ABS, in 2019 there were 90,514 “accommodation and food service” establishments in Australia.

So if Wes Lambert is right about what will happen nationally, around 27,000 establishments (including accommodation, since they’re buggered as well) will close and 4500 new ones will open. It’s possible, of course, that he is talking his book to get sympathy and assistance for his members, so a pinch of salt may be required, but let’s go with it for the exercise.

Lambert’s organisation told a parliamentary inquiry a few years ago that the average employment in Australian restaurants was 6.5 people, although it might be more now. But he’s talking at least 150,000 restaurant jobs being lost, mostly in Victoria and mostly in Melbourne’s CBD, which is basically dead now.

As discussed, a lot of those (employed) waiters were already being replaced by UberEats drivers (unincorporated business managers) paid much less and working less hours.

Is there a plan?

In addition, the great restaurant disaster of 2020 has been made much worse against the phenomenal growth of the industry over the past 10 years: people have been eating out more, including going out for breakfast all the time, and getting more takeaway.

This week, NAB’s chief economist Alan Oster released some very interesting data from the bank’s customers that he has been collecting for about 10 years. It’s all the money in and out of all NAB accounts, including where it’s from and what it’s paid for (he doesn’t identify the customers by name).

An increase of 3.8 per cent over 10 years might not sound much, but remember that’s as a percentage of budgets. According to ABS national accounts data, since 2009 total household consumption expenditure has increased from $172.7bn per quarter to $271.7bn, an increase of 57 per cent, or 4.6 per cent annual compound growth rate. An increase of 3.8 percentage points on top of a 57 per cent rise in total expenditure produces roughly a doubling of the average spend on cafes and restaurants.

That sounds about right, to be honest, and it confirms that the people in this industry have been having a golden time over the past decade. It means the 2020 rug-pull has been especially brutal, both for the real business owners and their employees.

The question now is: what is the government’s plan for this industry? Is there one? There is a plan to create new jobs with infrastructure and tax cuts, and in fact the October budget itself is apparently going to branded “JobMaker”.

What about starting with “JobSaver”?

Alan Kohler is the editor in chief of Eureka Report