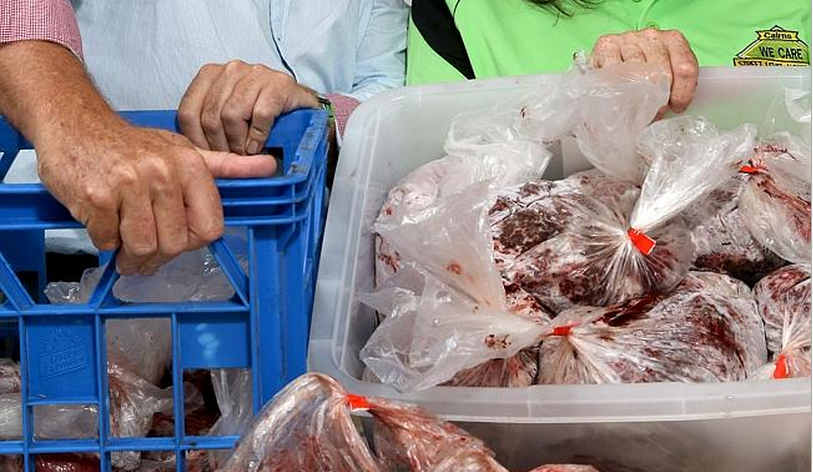 DONATION: Some of the mince and bones received by the charity in the earlier mix-up.

THE Fung family has donated a new freezer to Street Level Youth Care after a mix-up involving a meat donation.

The Fungs, behind the proposed $8.15 billion Aquis resort at Yorkeys Knob, had intended donating 200kg of beef from their cattle property near Mareeba to the charity.

But as a result of a mix-up, the cooler contained about 50kg of mince and 15 packs of soup bones.

An Aquis spokesman said as well as the original 200kg of beef, the Fungs were buying a freezer for the Cairns Baptist Church organisation. He said it was obvious the group did not have enough freezer space.

Roy Edwards of Street Level Youth Care was thrilled with the donations.

“They are on their way with a brand new freezer and they provided us with more meat today,” he said.

“They also said if we need more they will make it available to us in the future.”

Mr Edwards said regardless of the mix-up, the charity welcomed any charitable act.

“We appreciate every single thing that gets donated to us, it makes a big difference to us.”

With Christmas fast approaching Mr Edwards said the Fungs’ donation – and all donations – would be used.

“We host a Christmas dinner in Munro Martin Park and some of this meat will go towards that,” he said.

“Every little bit makes a difference and we are very happy the Fung family have come on board … hopefully they continue to support us.”

Aquis project officer Paul Fry with Co-ordinator of Street Level Youth Care, Suzanne Edwards, with some of the mince meat and bones that AQUIS has donated.