Where are our Tourism leaders taking us? 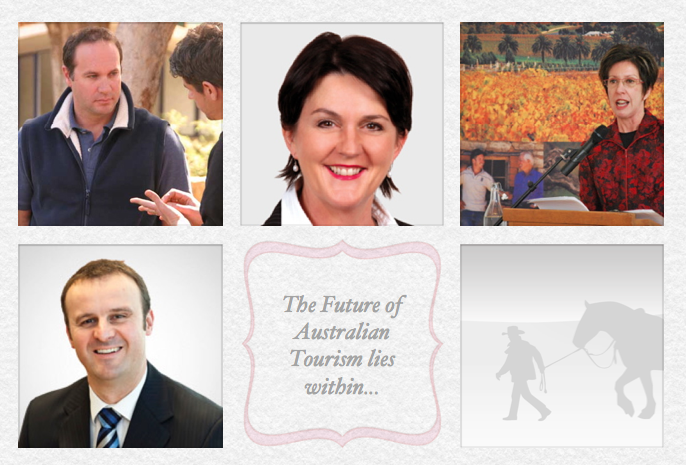 Where is your state going in Tourism? What challenges lay ahead for tourism in your state?

“Along with agriculture, resources and construction, tourism has been identified as one of the four pillars of the Queensland economy.

“We are moving quickly to reinvigorate this vital sector.  Within the first 100 days of the Newman Government, the inaugural DestinationQ Forum was held in Cairns. More than 300 delegates from all over the State attended the forum, the first of its kind for over 25 years in Queensland.

“A partnership agreement was signed between the Government and leading industry body QTIC.  A Post-Forum Working Group was formed to help deliver outcomes from this landmark Forum.

“In the 2012-13 Budget, the Government increased tourism funding with a $20 million boost to implement a Tourism Investment Strategy focusing on destination marketing.

“We have also more than doubled the amount of funding available for Regional Tourism Organisations to $7 million per year in recognition of the valuable role they play through their on-the-ground knowledge of what works and how best to attract tourists to their local areas.

“We have a target to double annual overnight visitor expenditure by 2020. We are absolutely committed to working collaboratively with the industry to achieve this target through a strategic 20 year plan to revitalise tourism and ensure that Queensland is open for business and once again a premier tourism destination.”

The tourism industry is a vital part of the Northern Territory’s economy, contributing an estimated $1.4 billion in 2010-11, or 8.5 per cent, gross value-added product to the NT economy and employing almost 12 per cent of the Territory workforce.

Like most areas across Australia, times have been tough for the Territory’s tourism sector. The combination of the high Australian dollar and the health of the global economy is affecting the industry.

This new Government sees tourism as a vital pillar in the Territory’s 3 hub economy. Since being elected in August, we have made changes towards revitalising the industry.

The Territory’s tourism agency, Tourism NT, will relocate to Alice Springs in 2013. A strong presence will remain in Darwin.

A Tourism Commission has been established to bring new rigour and a depth of expertise to grow our tourism sector. The commission is made up of people with immense experience and knowledge in the industry.

While we will continue to target holiday makers, our focus in the future will extend to business and education visitors as well as securing a larger portion of the cruise market. We will also increase our focus on all aspects of the Asian travel market. Later this year, Tourism NT will run the inaugural NT-China mission providing NT business representatives with fantastic opportunities to make key leisure and business events contacts in Shanghai, Beijing and Hong Kong.

There will be a shakeup in how we market the Territory to promote it as one product, ‘The’ Northern Territory. It is not about a Darwin Harbour cruise versus a camel ride in Central Australia or boat cruise up the Katherine River, it is all a Territory experience, and the product is ‘The’ Northern Territory. With this new focus, it is predicted visitors will explore areas which they hadn’t previously considered.

There will be challenges in the future but I look forward to seeing a strong and resilient Northern Territory tourism industry.

The ACT has a great story and great experiences to show off to visitors, which will be amplified even further with next year’s Centenary of Canberra.

The Centenary provides an opportunity for all Australians to re-visit and re-imagine their national capital – a city that tells the story of our country’s freedom, pride, achievements and aspirations.

The program is huge, and really does have something for everyone, see: www.canberra100.com.au But though we attract more than 3.8 million tourists a year to Canberra, it would be remiss not to recognise that we still suffer – unjustifiably in our view – from our role as Australia’s political capital. Journos stating, for example, ‘Today Canberra raised taxes on cigarettes and alcohol’ doesn’t help!

Nevertheless, we have a strong product to market – our research shows that the vast majority of people who visit have their expectations exceeded. As such, our challenge is less in improving what we have (though of course we will do this), but attracting people here in the first place.

A program of which I am particularly proud is our Human Brochure campaign. We gave 500 Australians a free weekend of activities here, asking only that they use social media to talk about their experience. It is a world-first campaign model utilising word of mouth advocacy in its simplest form.

The first phase of the campaign reached an estimated 4.2 million Australians, with stage two of the campaign will occur over the weekend of the 15 – 17 February. See: www.humanbrochure.com.au [1] In addition, we are continuing to provide work with the sector to improve our tourism offerings – from the Floriade festival each spring and the Enlighten festival in autumn to the upcoming opening of the spectacular National Arboretum and blockbuster exhibitions to international flights from the expanding Canberra airport, which we are hopeful of securing.

Now is an exciting time to be involved in Canberra’s tourism industry – and we are moving into our second century with pride on what our region has to offer the rest of Australia and the world.

The South Australian Tourism Industry is worth in excess of $5 billion and continues to see increases in domestic visitation, employment and expenditure.

The industry is responding well to changes in consumer behaviour that have seen a shift to the digital and online products. Visitors are increasingly researching and booking travel online. The South Australian Tourism Commission (SATC) has made a significant investment in a new consumer website, southaustralia.com, and are continually working with operators to ensure their product/s are bookable online and particularly via southaustralia.com.

It is essential that industry continues to build its digital presence and the SATC have committed to enabling this growth by providing support to operators to build and enhance their digital presence. The Government is also focused on working with industry to attract the rapidly growing Chinese market and developing strategies to grow South Australia as a destination in India.

The Government recognises that tourism creates opportunities for business, jobs and a sustainable environment as well as contributing to the social and economic health of South Australian communities.