Two birds brewing better than most 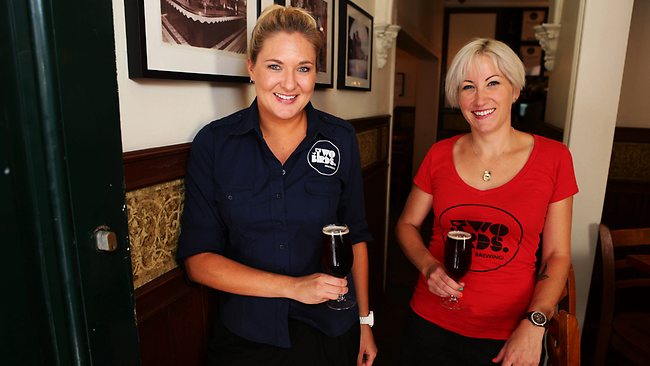 TWO Perth women are showing the men how it’s done in the craft beer industry with steady growth and a national distribution network.

Jayne Lewis and Danielle Allen, the women behind Two Birds Brewing, met when they were teenagers in Perth, but it was years later they realised their shared love of beer could be a business opportunity.

Ms Lewis and Ms Allen, who now live in Melbourne and Sydney respectively, have two beers, Golden Ale and Sunset Ale, which are distributed nationally. But they haven’t lost their WA roots.

Ms Lewis started her career at the iconic Little Creatures.

“I was fortunate enough to be taught to brew by some of the fussiest brewers while at Little Creatures and this has definitely stayed with me,” she said. “Their quality control, lab analysis and cleaning procedures were first-rate and this experience has stood me in good stead for everything that I’ve done since then.

“They also know a thing or two about producing well- balanced beers with good sessionability and this is a philosophy that we share at Two Birds Brewing.”

The easy-drinking nature of their beer “sessionability” to those in the industry has helped their sales jump about 10 per cent a month since they launched in June 2011.

“We really had no idea how the public were going to take to us and our beers, so it was pretty hard to forecast our first year sales,” Ms Allen said.

“Every month we are still surprised to look at our sales reports and realise we need to brew more beer and quickly.”

Ms Allen said they’d like to expand the business, but cash flow and financing the next stage were holding them back.

“We’d like to be able to maintain 100 per cent ownership, so we may have to take the staged approach and start small and build on it over time,” she said.

They also plan to brew some special one-off batches for beer festivals this year.