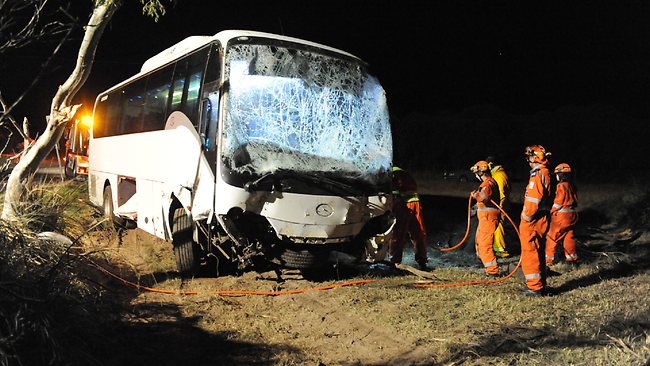 TWO teens were seriously hurt and 17 other people suffered minor injuries in a head-on crash between a tourist bus and car on Phillip Island.

A bus believed to be carrying 40 passengers veered off the road into a paddock after the crash at the intersection of Back Beach Rd and Pyramid Rock Rd in Ventnor about 10.05pm.

The 19-year-old male driver of the car – a Subaru sedan – and his 17-year-old female passenger, who were trapped, were rescued and flown to The Alfred hospital.

The girl received arm and abdominal injuries and the man suffered neck and facial injuries.

St John Ambulance had set up a medical tent to treat a further 12 bus passengers for minor injuries including cuts, bruising and abrasions.

A bus was organised to transport those with minor injuries from the scene. A bus’s windscreen is shattered after a crash in Phillip Island. Picture: Andrew Henshaw The scene of a bus and car collision on Back Beach Rd, Phillip Island. Picture: Andrew Henshaw