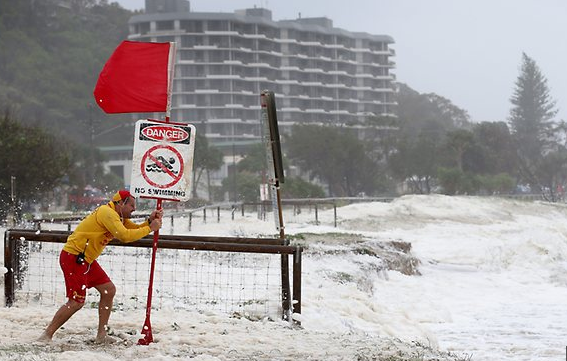 From abc.net.au EMMA ALBERICI, PRESENTER: A wild and deadly weather disaster is continuing to devastate parts of the east in Australia.

Queensland is again in the grips of a flood emergency with at least three people dead and thousands of homes and businesses underwater.

Parts of Brisbane are again flooded. The city has now been declared a natural disaster area with Bundaberg to the north expected to be hardest hit.

Floodwaters are also rising in New South Wales. Scores of people have been rescued in that state as well as the massive storm system heads towards Sydney.

In and around the city of Grafton 7,000 people are now isolated.

Our coverage begins with this report from Karen Barlow.

KAREN BARLOW, REPORTER: Rivers are rising and raging across eastern Australia. Ex-tropical Cyclone Oswald is smashing records and two years after the last flood disaster, Queensland has gone under again.

CAMPBELL NEWMAN, QLD PREMIER: This is a major flood crisis for the people of Queensland.

KAREN BARLOW: This is Brisbane. Low-lying areas are consumed.

There’s flooding again in Gympie, Gladstone, Rockhampton and the Lockyer Valley, a scene of so much devastation just two years ago.

BEN NAITOKO, IPSWICH RESIDENT: Well 2011 it went near the roof of the second storey, so we just got back in about 12 months ago, so deja vu.

KAREN BARLOW: The situation is critical in Bundaberg. The Burnett River has reached record levels and is still rising. At least 2,000 homes are underwater.

BETTY HOBSON, BUNDABERG BUSINESS OWNER: We’ve got nothing left. Our children have lost everything in the last 24 hours.

KAREN BARLOW: The town is an island.

CAMPBELL NEWMAN: I just assure people who may be listening in harm’s way at the moment, we’re doing everything we can to come and get you and get you out of that situation.

KAREN BARLOW: An 81-year-old Bundaberg man is one of three people known to have died in the floodwaters. A 60-year-old motorcyclist was washed off a bridge south of Brisbane and a 27-year-old man was lost in Gympie trying to walk through the water.

VOX POP: It came really quick. I think there was warning, but they didn’t’ expect it to happen as quick as what it did.

KAREN BARLOW: There was a near miss on the Sunshine Coast. Strong winds have whipped up enough foam from violent surf to hide a moving car.

JULIA GILLARD, PRIME MINISTER: Whether it’s bushfires, whether it’s floods, we are being challenged by nature, but we are a strong and smart nation and we’ll get through this as we always do by pulling together.

KAREN BARLOW: Fresh from recent firefighting efforts in NSW, the Opposition Leader Tony Abbott was pulling together a sandbag or two in at a Brisbane SES depot.

KAREN BARLOW: Brisbane is not expected to be hit as bad as two years ago and it’s not the worst of the state. But some residents are leaving and business owners in the CBD are bracing themselves.

There are communication problems across Queensland.

KAREN BARLOW: This couple stuck in Rockhampton has found truck drivers to be the best source of information.

JANELLE HOWARD: In terms of getting further, no-one really knows how long we’ll all be here. We’re all guessing it’s a week, but we’re not finding out, at all, unless you go out of your way to talk to people.

The rivers between the Tweed and Manning are flooding and State Emergency Service volunteers are advising people in some areas to evacuate.

Roads are closed and more than 20,000 people are without power.

Ex-tropical Cyclone Oswald will pass through the Hunter and Sydney overnight and is expected to reach the Illawarra around dawn.