Soft power: China invests in US cinemas to soften image 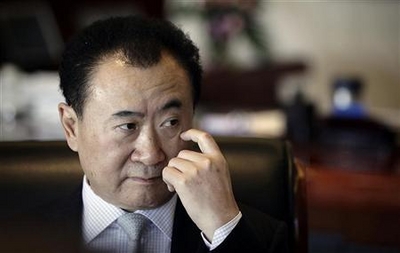 The privately-owned group’s founder and chairman Wang Jianlin, 58 and ranked as China’s third-richest man by Forbes, told Reuters on Monday he was talking to “well-known” hotel brands in the United States for possible acquisitions, though he declined to name names.

His forays overseas – he bought U.S. movie theatre chain AMC Entertainment Inc for $2.6 billion (1.6 billion pounds) in September and has earmarked North America for $10 billion of deals over a decade – are an example of China’s ‘soft power’, or cultural diplomacy, looking to win hearts and minds and promote understanding of China abroad.

Wang, whose estimated $8 billion fortune has afforded him a luxury yacht, private jet and shopping trips to Paris for designer suits, advised other Chinese companies interested in investing in the United States to avoid sensitive areas such as defence, telecoms and political issues.

While Dalian Wanda, a major developer of department stores and other commercial and tourism property, has provoked little backlash over its AMC acquisition, some Chinese firms have hit strong opposition when trying to buy foreign assets. Telecoms equipment makers Huawei Technologies and ZTE Corp were cited in October by a U.S. congressional report as being a potential security threat.

Chinese companies should try to do something American people would appreciate, Wang said, such as investing in areas like Kansas or Iowa that really need capital.

“Chinese enterprises being able to go to the United States and acquire companies does represent a kind of soft power,” he said. “But this is just the beginning. Chinese firms still lag far behind American companies. Maybe in 10 or 20 years we can stand at the same level.”

Wang said his group was in talks with “hotel management companies in the United States … seeking opportunities for mergers and acquisitions.

“And we’re in negotiations with the city governments of Washington D.C., New York and other American cities for the construction of hotels, department stores and commercial properties,” he said in an interview in his expansive 25th-floor office in downtown Beijing, a room dominated by a painting by Chinese artist Shu Qi, whose works Wanda is sponsoring at an exhibition in the Louvre Museum in Paris.

Wang, who served in the army for 17 years before making his fortune in property in Dalian in China’s north-east, said his company was talking with “the top six” Hollywood film studios and will work with 3-4 of them on deals to co-finance and co-produce movies.

China’s box-office revenue is growing by about 30 percent a year and could overtake North America by 2018, Wang said, noting “The Life of Pi” earned as much in China as it has in North America. The film, by Oscar-winning director Ang Lee, earned $48.4 million in its first two weeks in the United States and Canada.

“In five years, you’ll see the box-office revenue of a movie in the Chinese market will be about the same as the U.S. market,” he said, adding China’s box-office sales should hit $3 billion this year, up from what Chinese authorities reported as $2.1 billion in 2011.

Though a cinema mogul, Wang says he rarely watches movies and has no preference for the films Wanda will help produce. “I’m just an investor,” he said. “I just provide cash to the managers of the companies for film production.”

“It’s relatively easy to develop content for the Chinese market,” he said. “However, if we want to get into the international market, in terms of content, it’s not that easy. For this we’re cooperating with some of the U.S. internationally well-known studios.”

Fox film studio co-Chairman Jim Gianopulos told Reuters in September that Wanda was near an agreement with the News Corp unit to co-produce films in China.

China allows up to 34 foreign films to be distributed in local cinemas each year. Fourteen must be in special format, such as IMAX or 3D.