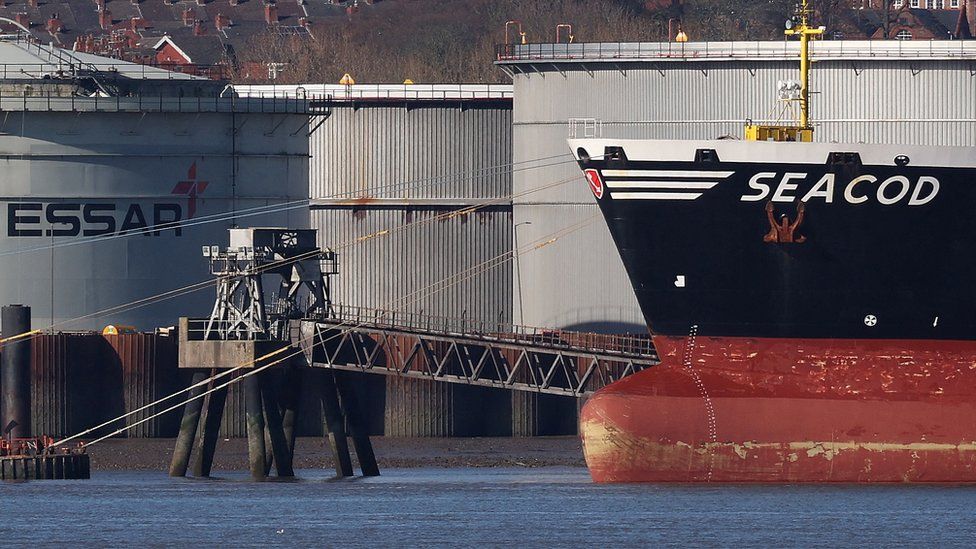 In the latest rounds of sanctions from the UK, Russian vessels will be banned from British ports to ensure the Kremlin is not funding its war effort in Ukraine with sales of oil and gas in the UK.

Russian vessels will be banned from British ports, the transport secretary, Grant Shapps, said on Monday, in an effort to ensure the Kremlin is not funding its war effort in Ukraine with sales of oil and gas in the UK.

The pledge came as multiple Russian oil tankers were either docked at UK ports or on either way to drop off consignments, in south Wales, Scotland and Orkney.

A Russian oil tanker was moored at Milford Haven in south Wales on Monday, even as Shapps announced plans to bar any future arrivals.

Pluto, a crude oil tanker delivering supplies from Primorsk – which accounts for 30% of Russian oil exports – arrived in the UK on 26 February, where it remained on Monday morning.

Milford Haven is the closest port to the Pembroke oil refinery, owned by the US energy firm Valero, which supplies petrol, diesel and jet fuel to the British market.

The Guardian has approached Valero for comment on whether Pluto has been offloading oil for use in its refinery. The vessel’s next destination is Derry, Northern Ireland, according to information from the marine traffic website VesselFinder.

Speaking in parliament on Monday, Brendan O’Hara MP, of the Scottish National party, questioned why the Russian tanker the NS Century was allowed to dock at the port of Finnart, near the Faslane nuclear submarine base.

Another ship, NS Champion, operated by the Russian state-owned shipping company Sovcomflot, was due to dock at the Flotta oil terminal in Orkney at 6pm on Tuesday.

However, Orkney council confirmed on Monday evening that the vessel would not be allowed into port, after Shapps sent a letter to all UK ports asking them not to grant access to Russian vessels.

He wrote: “The maritime sector is fundamental to international trade and we must play our part in restricting Russia’s economic interests and holding the Russian government to account.

“In these circumstances the Department for Transport does not consider it appropriate for Russian vessels to continue to enter UK ports.”

He said ports should refuse access to vessels that were “owned, controlled, chartered or operated by any person connected with Russia”.

The blockade should also apply to vessels connected to people targeted by sanctions, flying a Russian flag, or registered in Russia, Shapps said.

He added that the government would help ports identify Russian vessels in advance of them arriving at port and that further shipping sanctions would be announced soon.

A source in Orkney Islands council said they would be delighted if Shapps authorises a ban on Russian vessels.

“We’ve spent all weekend exploring every possible option to us [to prevent the NS Champion from docking],” the official said. “No stone has been left unturned. So this is good news, as far as we’re concerned.”

About 3% of UK gas demand is fulfilled by shipments of Russian liquefied natural gas (LNG), a super-chilled form of gas that can be transported by sea.

Terminals at Milford Haven and the Isle of Grain, Kent, have taken multiple consignments of LNG this month, including from the vast Yamal facility in northern Siberia, opened by the Russian president, Vladimir Putin, in 2017.

National Grid said it was still unsure whether LNG terminals, such as the one it operates on the Isle of Grain, were included in the order from Shapps.

“We are supportive of government action to order UK ports to block all Russian-linked ships, and are seeking to understand if this includes LNG terminals and Russian-linked cargo,” said a spokesperson.

“The decision as to whether the UK accepts Russian LNG sits with [the business department] and our customers – we have a legal, contractual obligation to receive our customers’ vessels into our terminal, and do not have any control over the origin of the LNG they contain.”