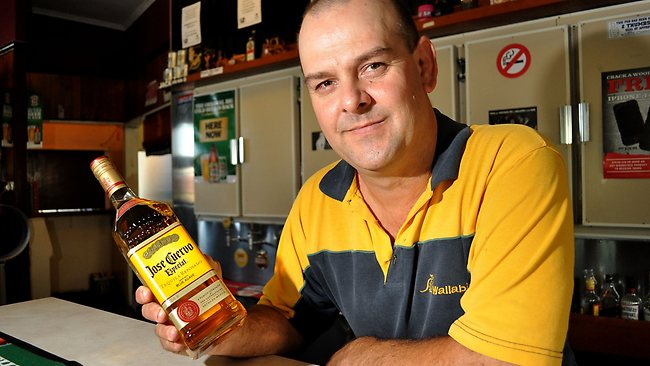 From the Innisfail Advocate

THREE would-be booze thieves who broke into the Mirriwinni Hotel north of Innisfail early yesterday found themselves in a fight when they were confronted by the hotel publican.

The trio picked the wrong bloke in 43-year-old Rob McEwan, who recently completed his fourth-dan black belt in the martial art of taekwondo.

Mr McEwan, who lives at the pub, upstairs with his wife and four children, was woken about 1.35am when he heard the robbers force entry.

Little did the thieves realise they had entered the pub with no fear.

“I was just ticked off. I’ve studied martial arts for 30 years, so I was quite prepared,” Mr McEwan said.

“I thought there was one guy to start with. I met him inside and we had a bit of a struggle and he come off second best.

“The other two have come from behind a storage area and hit me with a bottle, then I turned and gave them a go.”

The robbers took off at a pace that would have done Mirriwinni’s favourite son, former champion triathlete Brad Beven, proud as they fled into nearby canefields.

Mr McEwan suffered only minor injuries from the tequila slammer to the head that wasted a perfectly good 750ml bottle of Jose Cuervo Especial.

The outcome could have been far more serious than four stitches and minor cuts, as he feared for his family upstairs.

“I’m fine, I’ve got some stitches in my head from the bottle and a couple of minor cuts from the broken glass but that’s about it,” Mr McEwan said.

“I was more concerned about my family as we were all upstairs at the time.”

Scientific officers took samples from the scene yesterday and investigations are continuing in an attempt to locate the three offenders.