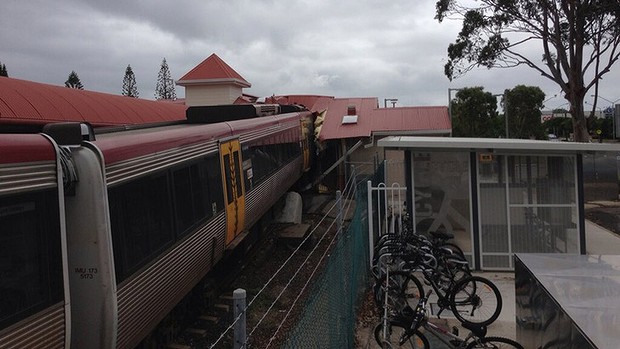 From the Brisbane Times:

As Queensland Rail began investigating why a train ploughed 10 metres into the Cleveland Train Station on Thursday, other drivers were coming forward to report braking problems.

One driver who wished to remain anonymous said he was forced to apply his emergency brakes on his regular route on Thursday morning – and he said he was not the only one.

The crashed train was lifted from Cleveland station in the early hours of Friday morning.

A train is lifted out of Cleveland station. Photo: Brian Hurst

The driver, who was working on a different rail line, said he was finding it difficult to brake at stations, experiencing what he called “slip and slide”.

“It’s just like in a car where you are skidding on water,” he said.

“When I got to one station I actually had to put on the emergency brakes to actually stop the train at the platform, because the slip sliding was causing me to go past where I was supposed to stop at the platform.

“Slip slide itself is a fairly common occurrence for trains, but the degree of slip slide I got [Thursday] morning was quite unusual.”

The front carriage of the train that crashed into Cleveland station was lifted out of the station building at 2.30am Friday and taken on a low loader to the Wacol railway workshops.

All six carriages of the train involved in the incident at Cleveland station yesterday were removed by 4.30am today.

A crowd of about 50 people watched the operation which started in the early afternoon.

The front of the train looked relatively intact apart from a smashed windscreen and damage to the lower bumper section.

The driver with concerns over braking said standard procedure during such conditions was to brake earlier.

He said another train crew experienced a similar issue on Wednesday and also had to apply the emergency brake.

But he said employees did not believe it was systemic problem with the trains or tracks.

“Talking to other crews, their opinion was with the heavy rain from the last few days and all the leaf litter on the track, including eucalyptus leaves because of the storms, when the train goes over the leaves on the rails, it is actually pulping the leaves, making oil, and causing the trains to slip,” he said.

“They did send a locomotive to put sand on one of the tracks to help get some grip.

“It’s just like they do in snow. They put a grip down so you don’t slip.”

However, the driver maintained train travel was safe.

“We have a service to do and a lot of work goes in to making that service safe and reliable,” he said.

Qeensland Rail said the train’s “black box” and CCTV have been retrieved and will be used as part of the investigation.

Experts arrived at the station on Friday morning to remove some debris and assess the structural integrity of the station building.

Queensland Rail says it is still too early to get a clear idea of when Cleveland station will be back in use.

A report on the Cleveland crash is expected to be handed down in three months.