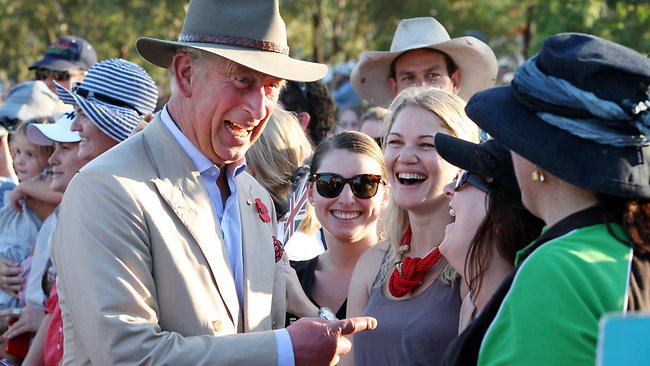 PRINCE Charles has addressed Longreach locals after visiting the Stockman’s Hall of Fame and a barbecue where the royals mingled with 300 invitees.

‘I have gone through my fair share of being called a Pommy bastard, I can assure you of that,’ he said in a speech to a crowd of Australians in London in early 2011.”*

Charles and Camilla, the Duchess of Cornwall, touched down in Longreach today and walked into the blistering heat of the Queensland outback where temperatures approached 40 degrees.

The Royal couple arrived on schedule from Papua New Guinea for a fleeting two hour visit, but such was the welcome the couple received in Longreach, their trip ran half an hour over time.

Premier Campbell Newman welcomed the royal pair at a community barbecue where he offered them a cold beer.

“We say to you today there’s no better place to experience rural Australia,” Mr Newman said.

Governor Penelope Wensley said she was delighted the iconic regional town of Longreach was chosen as the first stop.

Many more images can be found at the bottom of this story.

It was then the Prince of Wales’ turn to address the crowd. He donned an akubra hat he had been given as a gift and joked about having his jar of Jubilee marmite confiscated at the airport.

“I am so pleased our visit could begin here in rural Queensland,” he said.  “The outback remains a source of fascination and respect.”

He told the crowd of his time in Australia during his formative years, dealing with snakes and kangaroos he described as overtaking him on cross country runs.

“And ladies and gentleman, look at the result,” the Prince of Wales said.

In a quirky speech in which he also spoke of his joy at introducing the Duchess of Cornwall to Australia and its people, Prince Charles had fun with the language, joking about feeling “a few sausages short of a barbie”.

“The main reason for this bonza barbie is to celebrate the diamond jubilee,” he said.

On arrival, the royal couple were greeted by a party of nine officials including the Governor General Quentin Bryce, Queensland Governor Penelope Wensley and Queensland Premier Campbell Newman and wife Lisa.

A smattering of locals waited outside the airport fence but more than one thousand gathered at the Stockman’s Hall of Fame precinct across the road, where they had been told to wait.

School children, families, infants in strollers, media and a brass band gathered under a marquee in searing temperatures to await the royals, whose first stop was the Qantas Founders Museum.

Prince Charles also named and dedicated a Royal Flying Doctor Service aircraft to an English-based charity which raises money for the flying doctors – “RFDS Friends in the UK”.

The couple were also scheduled to inspect the Stockman’s Hall of Fame and attend a barbecue where around 300 locals are expected to mingle with the Royals as thery sample local produce.

The couple were scheduled to leave shortly after 6pm for Melbourne.

This afternoon he and his wife, Leonie, met with the Prince of Wales and the Duchess of Cornwall at the Heritage Hangar of the Qantas Founders Museum to tell his story of survival.

Jim and Leonie Nunn tell of their gratitude to the Royal Flying Doctor Service.

The royal couple were on site to inspect and name a plane in honour of the RFDS Friends in the UK.

They also viewed a simulated emergency situation before being presented with gifts.

For the Prince of Wales, a replica of the RFDS plane. The Duchess of Cornwall was gifted an original painting by artist Howard Steer, also known as the ‘Flying Doctor artist’.

Mr Nunn was working at cattle yards, about 20km from their home in a remote part of Queensland 134km south of Longreach when he tripped and broke his femur.

He was trying to pick up a broken gate knocked down by an errant bullock. The RFDS then flew him to Toowoomba.

Both he and his wife raise funds for the RFDS.

The royal couple laughed as Mrs Nunn joked that her husband had remarked he was glad he was wearing jocks that day.

They then shook hands. The Prince of Wales asked Mr Nunn if he was better now.

“I shook his hand, and hers and I told him I want another aeroplane,” Mr Nunn said of his encounter.

“He said he was going to buy one.”

HOT WEATHER: Camilla shelters under an umbrella from the outback sun.

The Prince of Wales then addressed the crowd, acknowledging the work of the RFDS and lamenting he did not have a bottle of champagne to break on the new plane to give it a proper christening.

“It was wonderful to hear just now from a satisfied customer,” He said.

“I know for the last 85 years the Royal Flying Doctor Service has been an integral part of rural life i Australia.

“You can imagine just how crucial this service is.

“It is truly remarkable what they manage to achieve.”

OUTBACK G’DAY: Charles and Camilla are welcomed after touching down in Longreach. PIC: Sarah Vogler

He also acknowledged the work of the RFDs during the 2010/11 floods.

The royal couple spent just over half an hour at the hangar before being escorted to the Stockman’s Hall of Fame for their next official engagement.

Earlier today, the outback appetite for royalty – or at least royal pies – was reaching fever pitch as the residents of Longreach awaited Prince Charles and Camilla.

Merino Bakery in the centre of town has created its own royal pie in honour of the much-anticipated visit and baker Ben Roughan said the locals have shown an appetite.

ROYAL RECIPE: Merino Bakery owner Ben Roughan and customer Amanda Deane have a laugh with the Prince Charles mannequin and his Prince Charles Royal Lamb Pie in the main street as Longreach locals prepare for the arrival of Prince Charles and his wife Camilla , HRH The Duchess of Cornwall. PIC: Lyndon Mechielsen

He said he hoped to join what is expected to be a large crowd hoping to catch a glimpse of the couple.

Premier Campbell Newman and his wife Lisa arrived in Longreach this afternoon from Winton, about three hours before the royal couple are due to touch down.

He was also accompanied by Attorney-General Jarrod Bleijie.

“It’s fantastic for Queensland but particularly fantastic for Longreach that this is the point of arrival in the nation for Prince Charles and the Duchess of Cornwall,” Mr Newman said of the visit.

“It’s going to assist in giving a boost to tourism out here because it will put the area and its attractions in peoples’ minds again.”

It also emerged today that a little-known group of Poms who have helped keep the Flying Doctor aloft for the last decade will get a special mention.

Among the crowd will be several representatives from that icon of the outback – the Flying Doctor – as the Royal couple name one of the RFDS’s aircraft in honour of an energetic group of Brits.

The RFDS “Friends in the UK” was established in 2003 to mark the 75th Anniversary of the first Flying Doctors first flight, with Prince Charles as patron.

Since then the “Friends” have raised more than $5 million mainly to help supply aircraft parts to RFDS aircraft across Australia, with Prince Charles extending his patronage a further five years back in 2010.

Queen Elizabeth’s connection to the service extends back half a century when she visited the RFDS Broken Hill base in 1954 when she toured Australia as a newly-crowned Queen.

An RFDS spokeswoman said the Flying Doctor also received a financial boost from the Royal Wedding.

“The RFDS was named as one of the beneficiaries of a charity fund set up by Prince William and Kate Middleton to celebrate their wedding in 2011,” the spokeswoman said.

The Longreach Royal visit will last just two hours but locals are expected to put on a warm outback welcome, with the temperature tipped to reach 39 degrees.

But a few light showers in the past few weeks have left the town looking green and welcoming.

Prince Charles and Camilla Parker Bowles, who is visiting Australia for the first time, will visit the Qantas Founders Museum, the Stockman’s Hall of Fame and attend a community barbecue with around 300 locals.

The Stockman’s hall, which includes the RFDS section, is delighted to host the couple not merely because Prince Charles is their patron.

Hall chairman David Brook, OAM, said the visit was a great celebration for the Australian bush, its people and Australia’s rural heritage.

“We value the interest and support being shown by our Patron,” Mr Brook said.

*excerpt from ‘The Sweet Spot” by SMH columnist Peter Hartcherre the famed Australian Tall Poppy Syndrome, in which the tallest flowers in the field will be cut down to the same size as all others:

‘The heir to the British throne, Prince Charles, had a taste of it when he was sent to high school in Australia for a couple of terms. ‘I have gone through my fair share of being called a Pommy bastard, I can assure you of that,’ he said in a speech to a crowd of Australians in London in early 2011. I was an experience that Charles hadn’t encountered in a deferrential, class-conscious Britain, and would never expect to. “But look what it has done for me. By God, it was good for the character. If you want to develop character, go to Australia.” If Australia keeps its current constitutional arrangements, Charles, one day, will be its king. His treatment at the hands of his Australian schoolmates illuminates a key difference between Australian social attitudes and British.