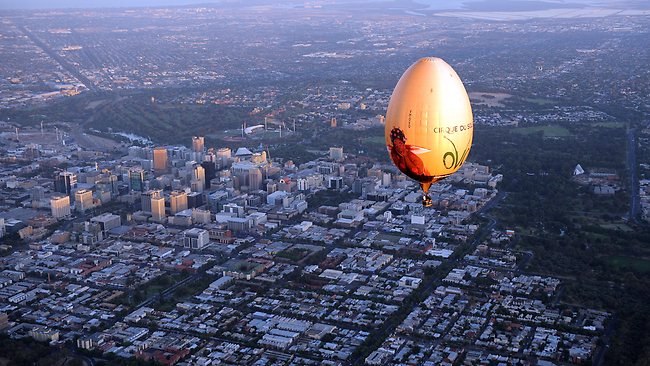 AS the sun rose in the Adelaide sky yesterday, so did a curious golden egg that stopped early risers in their tracks.

It was Cirque du Soleil’s Ovo hot air balloon, featuring a towering image of their latest show’s roly-poly ladybird character peering down on the CBD.

Flown by award-winning balloon pilot Paul Gibbs, the magnificent craft lifted from Unley Oval at dawn and floated over the eastern suburbs a sight rarely seen above the city.

“Typically, it’s very rare for a hot-air balloons to be flown over major cities because it can sometimes be difficult to get clearance through air traffic control,” Mr Gibbs said.

“We were able to negotiate a clearance with air traffic control that would keep their approach clear to the runway at Adelaide airport.

“We operate as any registered aircraft would. We have a radio and show up on their radar so we’re treated as a normal aircraft but with slightly different parameters in that we can only go where the wind takes us.”

Ovo Portuguese for “egg” is the name of Cirque du Soleil’s latest show, which opens in Adelaide next month. Riding in the balloon in the early morning silence was like being in a real-life Google map.

I loved the view looking over the Mt Lofty Ranges as the sun was rising, and the vista across the city and down to the glassy waters of Gulf St Vincent.

The giant balloon was custom designed by Mr Gibbs’ company Picture This and manufactured by Cameron Balloons from Bristol in the UK.

“We came up with the concept and Cirque loved it, so far it’s been very popular,” he said.

Ovo has popped up above some of Australia’s famous landmarks.

“This particular balloon spends its life flying over cities,” Mr Gibbs said. “It’s been to Brisbane, had a stint in Sydney and Canberra, here in Adelaide now, and then to moves Melbourne in January.”

The balloon caught the attention of early morning commuters, some of whom were seen pulling over in their cars to take snapshots.

Some curious individuals called radio stations wanting information on the balloon while other spectators ran into the streets along with their neighbours, all pointing to the sky and waving at the mysterious flying object before it landed in Millswood.

Cirque du Soleil’s Grand Chapiteau will be erected in Tambawodli, next to Ellis Park, tomorrow.

Ovo begins on December 6 with a VIP opening night and will run until January 6.