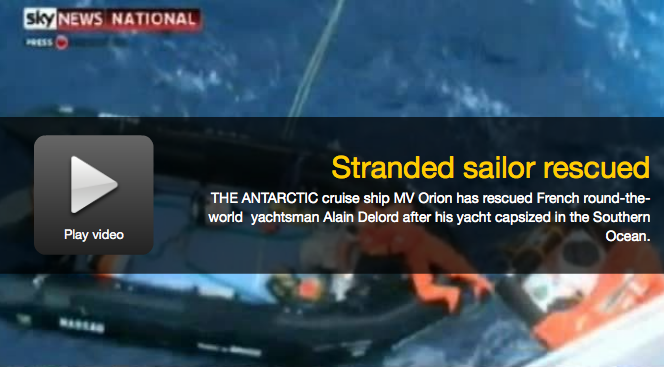 THE captain of an Antarctic cruise ship diverted to rescue a stricken yachtsman in the remote Southern Ocean has described how passengers cheered when Alain Delord was plucked from the sea.

After three days adrift on a life raft, the 63-year-old round-the-world yachtsman was rescued by the Orion about 500 nautical miles southwest of Hobart last night.

The Orion’s captain Mike Taylor said at first the vessel’s 100 passengers on their once-in-a-lifetime trip to Macquarie Island were “massively disappointed” about being diverted.

“But there was a cheer you could hear right over the ship when we pulled him in through the door,” Captain Taylor told ABC radio today.

Captain Taylor said the ship was about 680 miles south of Mr Delord when he was contacted by the Rescue Coordination Centre in Canberra.

“(The RCC) and called us and said we’re Johnny on the spot pretty much,” he said.

He said the conditions in which Mr Delord was rescued, with big swells and high winds, were as extreme as he had experienced. Without the help of the RCC, the Orion would never have found him.

“It was unbelievable how difficult he was to see,” he said.

A spokeswoman for the Australian Maritime Safety Authority (AMSA) said Mr Delord was getting medical attention and appeared to be in good health.

Delord, who set off at the beginning of October, abandoned his yacht Tchouk Tchouk Nougaton after the mast broke into four pieces and its hull was damaged in rough weather.

The yachtsman had received an air drop of food, water, communications equipment and a survival suit while he waited for his rescue.

On board the Orion, Tasmanian yachtsman and expedition leader Don McIntyre said the rescue mission started about 9.30pm and took just 25 minutes.

“We changed plans on the run, a lot of things didn’t quite work out the way we thought but we modified the plans very quickly,” he said.

“The zodiac [inflatable boat] went straight to the life raft and we managed to get Alain out very quickly into another raft and came back to the side gate [of the Orion] where we were able to attach a line to him and wait for the swells to work with us and then we quickly hauled him in through the side of the ship.”

Recovering in one of the passenger cabins last night, Mr Delord had not sustained any serious injuries despite his ordeal.

“The good news is that Alain is in fantastic health,” Mr McIntyre said.

“He’s obviously very weak, very tired … Basically after a full check out in the hospital the doctor was very surprised at how good a condition he was in.”

The Orion and Mr Delord are due in Hobart tomorrow.

The SMH.com.au tries to imply here that compensation claims are brewing… then quotes the Expedition leader who says there’s been no such complaint.