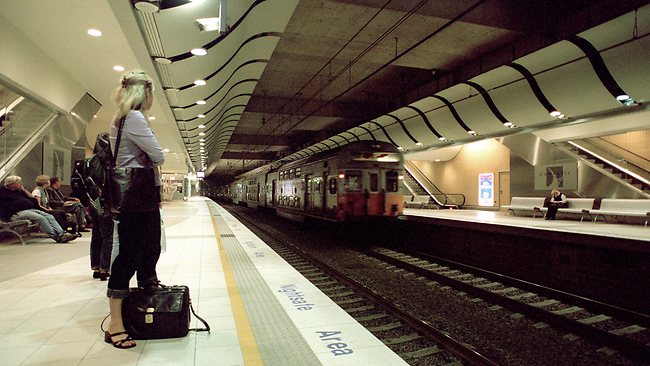 From the Point Pirie Recorder

Ten million passengers – almost half the population of Australia – will travel on Sydney’s Airport Link train this year. But it was a different story in 2007 when the company, like so many infrastructure projects of its time, went into liquidation.

In addition, more than 5.7 million passengers will travel to or from Sydney Airport by train this year, an increase of 1.7 million people since 2009.

“This growth is the most pleasing aspect of our business,” says CEO Tim Anderson, chief executive of Airport Link Company.

It’s certainly an achievement for a business that had a difficult childhood. The airport line was built between 1995 and 2000 and opened in May 2000. It cost $900 million to build and was the largest public transport project associated with the Sydney Olympics. It comprises a nine kilometre tunnel from Central Station to Sydney Airport. The line then continues on to Wolli Creek in Sydney’s outer suburbs.

“This was a magnificent engineering feat and a credit to those associated with its construction,” says Anderson.

But like many private infrastructure projects of that era, difficulties ensued – patronage support was not immediate and the company went into administration soon after opening and then liquidation, although the line remained open.

The company remained in liquidation until 2007 when it was bought by its current investors. ALC is owned by specialist infrastructure manager CP2 and investors associated with Hastings Fund Management.

The new management team has since improved service standards, built new infrastructure and focused on marketing and product awareness. The business has also increased staff levels from 60 in 2008 to 74 now and service delivery, reducing queuing and passenger delays.

Part of the reason for the business’s stellar growth was a decision by the NSW government to remove the station access fee, which has reduced the cost of tickets at Green Square and Mascot from $5.80 to $3.20. Another contributor has been the significant number of residential developments that have been undertaken at Green Square and Mascot, which is serviced by the line. In recent years thousands of new residents have moved into the area and at least 11,000 people use Mascot station each day for commuter purposes, a figure that is growing each year.

“Our approach is to maintain and develop high quality infrastructure. Presentation really counts when dealing with the public and we present our stations as well lit and always clean,” says Anderson.

‘This is a challenge given an average of 40,000 passengers pass through its stations each weekday.

The business operates in an underground environment, 23 metres below the earth’s surface.

A key challenge is that as Australia’s tourism gateway, AirportLink deals with thousands of questions each week.

“We need to continually be able to answer these questions without slowing down our engagement and service levels,” says Anderson.

The business would incur an additional 15,000 hours a year of interaction if the time it took to deal with its 5.7 million airport passengers increased by just 10 seconds each. So efficiency in moving passengers through stations is critical.

This involves what Anderson calls considerable “upstream marketing” – informing people through brochures, maps and website interaction so the public is armed with knowledge before they enter stations. “We experience more than 750,000 visits to our website each year, averaging three minutes each, and the public take more than 1 million of our brochures and maps each year.”

“Identify the problems. Look at the business through the eyes of the customer. Decide what actions are urgent and what can wait. Don’t go down too many paths at once. Value your employees and provide them with a good working environment because to experience good business growth you need a supportive workforce.”

Anderson says it’s also important to eliminate complexity. “Business is tough enough without making extra burdens for yourself. Growth is fantastic but growth can result in complexity and complexity can create decay. So you need to be careful when planning growth strategies.”

In terms of the future, Anderson is hopeful AirportLink will carry 12 million passengers next year. “Of that 12 million, I would like to see well over six million people catching the train to or from Sydney Airport.”

• The business is not subsidised by the NSW government. It is a commercial venture that operates profitably and provides the government with significant revenue-sharing benefits.

• RailCorp provides 260 trains services each weekday across 19 hours, with an average of one train every four minutes.

• More than $40 million in rail tickets are sold on the Airport line each year.