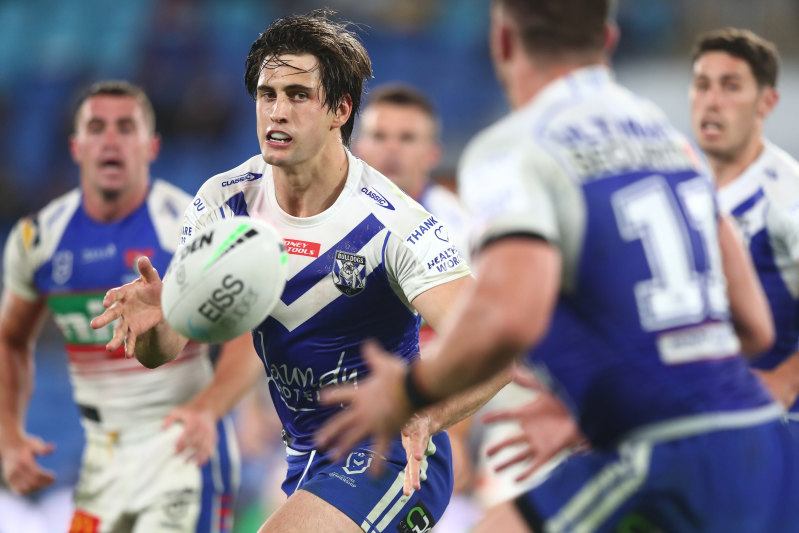 In one of the oddest events of the NRL year, off contract Bulldogs player Lachlan Lewis has attempted to sell a sound bar that has provided by the NRL. The sound bar was a part of the NRL package that the league has given to clubs that were forced to relocate as a result of the Sydney lockdown.

Lewis currently on $400,000 a year listed the soundbar on his personal ebay account, Lewis has been fined $10,000, forced to take counselling and education courses and had to meet with NRL chief executive Andrew Abdo.

Lachlan Lewis’ attempt to sell an NRL sound bar was only foiled when a Bulldogs official followed him into a hotel car park and caught the player red handed as he was about to hand over the unused equipment to a courier.

In one of the most bizarre incidents of the year, the off-contract half risks having the remaining two months of his contract torn up by the club over an elaborate weeks-long plot to sell the system online.

According to sources familiar with the situation, Lewis was wearing a hoodie when he snuck into a communal team area at their Gold Coast accommodation, taking a sound bar which was still in its packaging.

He had listed it under his own personal eBay account as for sale for $650, or best offer, in early August. The listing even had a photo similar to the equipment he planned to sell.

The NRL had given all NSW-based clubs which relocated to Queensland during Sydney’s COVID outbreak entertainment and electrical equipment to use while in quarantine.

It was only when the Bulldogs were undergoing a stocktake of their gear to prepare for the end of the season – three weeks after Lewis had made an eBay listing – did club officials realise the NRL-bought sound bar was missing.

Hotel CCTV footage was then obtained of Lewis taking the system.

His attempt to sell it was only blocked when a suspicious Bulldogs official followed Lewis a short distance to his car in the hotel car park where he had organised to meet a courier, who was charged with delivering it to a Queensland buyer.

When asked by an official what he was doing, Lewis was found to have told the courier the speaker system wasn’t meant to be delivered that day.

The Bulldogs then reported the incident to the NRL integrity unit, who heard from an apologetic Lewis it was a joke gone wrong.

He has since refunded the money to the eBay buyer and will be required to meet NRL chief executive Andrew Abdo.

Lewis, who is in the final weeks of a deal worth more than $400,000 per year with the wooden spooners, is struggling to save his NRL career.

He was fined $10,000 by the NRL on Friday and ordered to undergo education and counselling courses.

The 25-year-old, who has been told by the Bulldogs he won’t have his contract renewed next year, is now grappling with the prospect of having the rest of his deal torn up over the saga, which has angered Canterbury officials.

Lewis, who was named in the Bulldogs’ starting team for last week’s clash against the Sea Eagles, has been stood down from the final two games of the season. Canterbury will finish their campaign against the Tigers on Sunday.

Lewis has featured in 43 games for the Bulldogs over four years and is without a deal for next season. The NRL said it wouldn’t cancel the rest of his contract with Canterbury, but he would need to re-apply for registration if finds another club for 2022 or beyond.

He’s one of 12 players who will leave the Bulldogs at the end of the season, including former State of Origin forward Dylan Napa.

Lewis’ manager Luke Lombardi did not respond to requests for comment from the Herald.

The Lewis conundrum comes as the Bulldogs edge closer to a climax with the Adam Elliott situation, telling the back-rower’s manager David Riolo they would be happy to facilitate any wishes he had for his client to rejuvenate his NRL career elsewhere.

Elliott, who was served a breach notice for being thrown out of a Gold Coast restaurant shirtless after a toilet tryst with NRLW player Millie Boyle, is due to front the club’s board on Monday.

Asked about the importance of finishing the season well, coach Trent Barrett said: “We’ve got a lot of guys leaving the club we want to send out on a good note, most notably Will Hopoate who has been here a long time.

“It has been a really big learning curve for [our young guys] and they’ve been thrust into first grade probably 12 or 18 months prematurely through different circumstances. I think at times they’ve handled themselves really, really well and got a lot of lessons out of them.

“That’s all I can ask of the players; to play with a lot of pride and an outcome would be lovely.”