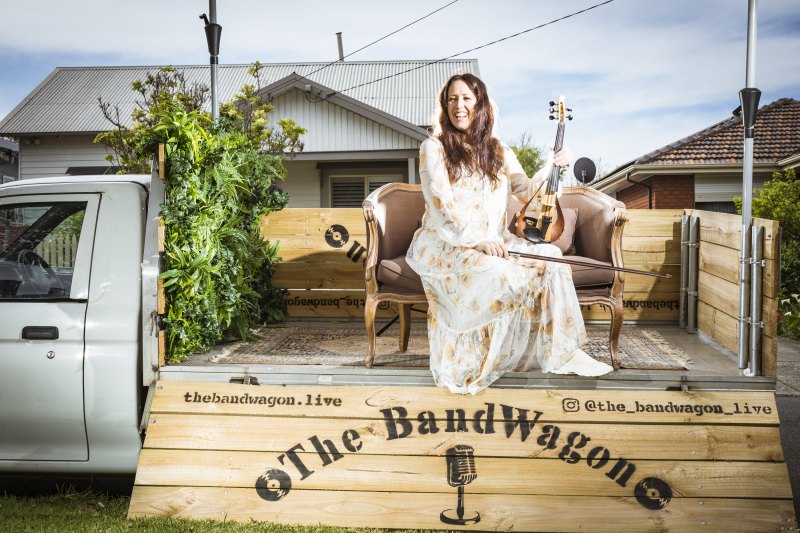 Lockdowns affected Musician significantly, with venues forced to shut and events cancelled or having limited audiences (if allowed to operate).

Melbourne musician Fem Belling was determined to bring music back any way she could and created the Band Wagon, bringing music on wheels for when restrictions ease.

Lockdowns, as everyone knows, have stripped the music from Melbourne’s streets, clubs, pubs, festivals and performance venues.

But jazz singer and violinist Fem Belling is determined the music will pop right back up. As new freedoms edge closer, she has a mobile pop-up jazz club ready to roll.

Ms Belling was one of thousands of performers who lost regular gigs when the city closed down for months last year, and kept closing during the lockdowns that have followed.

“Like performers everywhere, I felt so powerless,” Belling says. “We all felt so left behind. I’ve never felt powerless before. I write all my own shows, and suddenly there seemed no point because there was nowhere to perform.”

But she and her partner and technical director Casey Macrae weren’t about to let such crushing drawbacks defeat them.

They decided to prepare to bring music back to the streets – and everywhere else – when restrictions finally began to ease and outdoor music was permitted again.

And so was born the Band Wagon.

Belling, with time on her hands, was trying one evening to figure out a future for her musical career when the idea of a mobile outdoor jazz club came to her.

“Melbourne has always been renowned for craziness and artistry,” she says.

One of the city’s more memorable musical moments was rock band AC/DC performing Long Way to the Top while being driven through the CBD on the back of a truck more than 40 years ago.

Music on wheels. The idea lit up Belling’s locked-down life. A bandwagon was required!

Macrae was handy with things mechanical, electrical and technical. Enthused by the idea, he began converting a Toyota ute.

The tray became a stage, and a bank of lithium batteries was installed so a band’s sound equipment and lights could run for several hours without the need to plug in to mains power. The couple found an old upright piano – a Belling brand, Fem was delighted to discover – and stripped it out so any form of electrical keyboard could be slotted in.

“We can set up anywhere, and observe all the COVID-safe protocols,” Belling says.

“It would be brilliant for a picnic, or a day at a winery, a party in your driveway or a local council festival. We could just pull up to a curb and play.

“You could have me and my band playing, or use the stage for your own musicians. I would like to pitch to a big outdoor festival and curate a small show to be held in a corner of the site. Really, there’s no limit.

“It feels quite emotional to have put something together that really works during these times. We can’t wait to bring music back to the streets again.”