Matchfixing across the world game 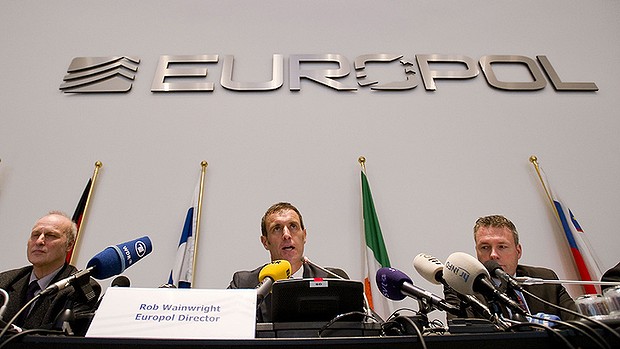 European police warned that the integrity of football was at stake, as they revealed they had smashed a criminal network fixing hundreds of matches, including in the Champions League and World Cup qualifiers.

Europol said a five-country probe had identified 380 suspicious matches targeted by a Singapore-based betting cartel, whose illegal activities stretched to players, referees and officials across the world at all levels of the game.

“It is clear to us that this is the biggest investigation ever into suspected match fixing,” Europol chief Rob Wainwright told a news conference in The Hague, adding that the fall-out hit at the heart of the world game’s reputation.

Europol’s chief Rob Wainwright, centre, speaks next to Friedhelm Althans, chief investigator of Bochum police (left) and Andreas Bachmann from the Bochum prosecution service during a press conference in The Hague on February 4 after the police smashed a criminal network suspected of fixing 380 football matches, including in the Champions League and World Cup qualifiers. Photo: Robin Van Lonkhuijsen/AFP/ANP

“It is the work of a sophisticated organised crime syndicate based in Asia and working with criminal facilitators around Europe,” said Wainwright.

He added: “Matchfixing is a significant threat to football… involving a broad community of actors. Illegal profits are being made that threatens the very fabric of the game.”

Wainwright said he would be writing to the head of European football’s governing body UEFA, Michel Platini, but said all of football needed to “heed the warning” and be on their guard.

The revelations come after Interpol last month warned that global football corruption was helping to fuel the criminal underworld’s domination of prostitution, drug-trafficking and gun-running and in the wake of several high-profile scandals.

They include the so-called “calcioscommesse” or illegal football betting affair in Italy, which overshadowed the country’s preparations for last year’s European championships and saw several top footballers arrested.

Interpol chief Ronald Noble said last November that it expected to make arrests in Singapore over the Italian match-fixing scandal after links were suspected between one player arrested and crimelord Tan Seet Eng or Dan Tan.

As part of investigations, 14 people have already been sentenced to a total of 39 years in prison, Europol said, with more prosecutions expected.

In the latest claims, Europol said that at least 425 referees, players and other officials were suspected of involvement, with matches rigged so that major sums of money could be won through betting.

Most of the allegedly fixed matches were played in the Turkish, German and Swiss championships, but other matches around the world are also concerned.

No details were given about which top-flight matches were involved because some investigations were still on-going, although it was revealed that one of the Champions League matches had been played in England.

Criminals made over eight million euros ($11 million) in profits from betting on fixed matches.

Europol showed television coverage of a suspect match, a junior international between Argentina and Bolivia, during which a Hungarian referee awards a highly dubious penalty at the end of the game.

The probe was carried out by Europol and five European countries: Germany, Hungary, Slovenia, Finland, Austria.

A further 300 suspicious matches have been identified outside Europe in Africa, Asia, and South and Central America, in the course of the investigation, Europol said.

German chief investigator Friedhelm Althans said that showed the truly “horrifying nature of the problem” and the implications were stark, including financial losses for legal betting firms, clubs, players and the trust of the supporting public.

FIFA’s own “corruption-buster”, former Interpol executive Ralph Mutschke, also said last month that no league in the world was safe from corruption, amid calls for legislation to tackle the scourge of bribery in sport.