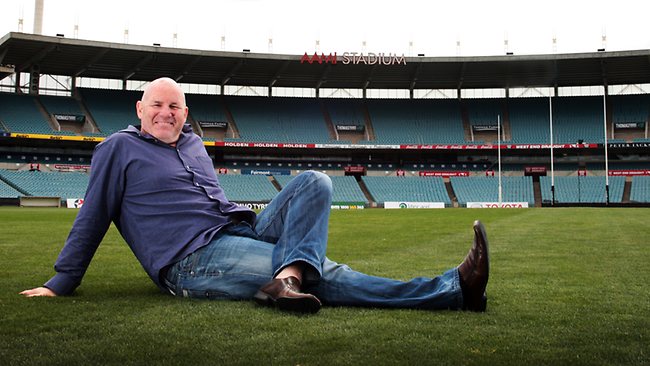 FOOTBALL greats have pleaded for parts of AAMI Stadium to be retained so it can be used as a boutique sports venue when AFL moves to Adelaide Oval.

But the latest state government plan for the precinct shows all the grandstands would eventually be bulldozed to cater for a major redevelopment, including 1600 homes, over the next 20 years.

On Friday night, 42,000 fans watched a round one AFL game at the West Lakes stadium for the last time.

Crows, Power and SANFL greats want it to continue hosting sports events. These could include SANFL practice or pre-season games, amateur sport and cricket.

Waverley has been redeveloped with housing over the past 13 years but maintains a heritage-listed grandstand, which seats 2000 spectators compared with the ground’s peak of 78,000.

“I think we need to be promoting AAMI as a boutique venue,” Jarman said. “You’ve got to have some sort of stand there – you can’t knock it all down.”

Jarman said a drop-in cricket pitch should be considered so sport could be played all year round, as well as opening the oval to community sporting clubs.

“Obviously they need to work around the Adelaide Crows,” he said. “At the end of the day, they need to make sure they get it right, not just bulldoze it.”

The new plan, which is open for public consultation until April 24, assumes the demolition of the stadium but the oval would be retained for Adelaide Crows training and “community uses at other times”.

The long-term plan includes shops, offices and apartment buildings up to 10 storeys high, as well as a network of parks, plaza areas and pedestrian and cycling paths.

Tredrea said it was up to experts to decide how to best utilise the stadium precinct to fund the SANFL, but would like to see them maintain a quality oval.

“I always thought an idea was a boutique stadium where you can play trial games,” he said. “It’s time to move forward to Adelaide Oval. (But) I’d hate to think it’ll get totally gutted.”

Inaugural Crows coach Graham Cornes said it was important the SANFL maximised the commercial potential of the precinct to fund South Australian football.

“That land (at AAMI) is one of the biggest assets for any sport organisation in Australia. So they must maximise the commercial potential,” he said.

“It’s important, of course, to keep a ground of some sorts, and some sort of viewing platform, but you have to understand that asset has to be resourced (to fund) all South Australian football.

“I think it’s important it is maintained as a football oval, from which SANFL football can be played.”

SANFL executive commissioner Leigh Whicker said the league had a responsibility to ensure the project was a commercial success but would not say what it planned to do with the open space it retained at the precinct.

In 2011, SANFL president John Olsen said money raised from the sale and redevelopment of AAMI would be locked in a “future fund” for SA football.

The new plan allows for 15 per cent of any future development to be open space. This is 3 per cent less than Charles Sturt Council has asked for but still 3 per cent higher than government regulations for similar developments.

Charles Sturt Mayor Kirsten Alexander said the State Government and SANFL must increase the amount of open space being retained at West Lakes to cater for the area’s growing community.

According to the plans, only a “portion” of Max Basheer Reserve, on Brebner Drive, would be retained as part of the development.

“(Max Basheer Reserve) is used by many, many people each day for sporting and community use,” Ms Alexander said.

“People need open space, they need to have room to move.”

What area is affected by the planned development?

What is the key purpose of the development?

To plan and implement new mixed-use developments that focus on public transport and allow for more sustainable forms of living and working.

Who owns the land?

How much will the SANFL raise from the redevelopment?

It remains unclear exactly how much the SANFL will raise from the project but latest estimates suggest it could be around $80 million.

What will happen to the Oval?

The existing football oval, a portion of Max Basheer Reserve and linear paths will be retained.

Will the Crows still train there?

Yes. The plan says the retained ovals would be used by the Adelaide Football Club and for other community uses.

What will happen to the stadium?

The long-term vision (11-25 years) assumes the demolition of AAMI Stadium.

How many residences will be built?

The overall master plan vision is estimated to deliver up to 1633 dwellings by 2031. The future population of the precinct is estimated at about 3200.

What are the building heights likely to be?

How can I see the plan?

When does public consultation on the plan end?

How can I provide a submission?