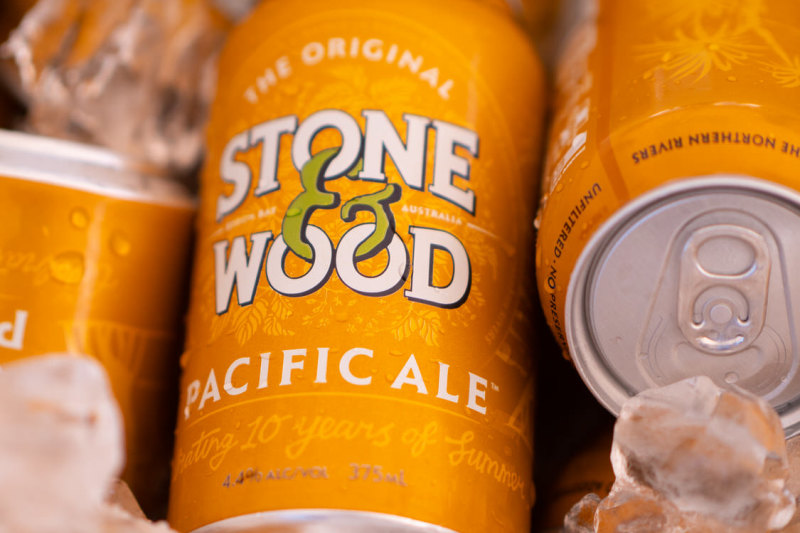 Lion has added to its portfolio Stone & Wood craft beers, after completing a deal to purchase Fermentum group. Lion has committed to the development of Fermentum Groups flagship Stone & Wood brand which accounts for around 1% of the national beer market.

The deal also has community commitments to Fermentum Groups home of Byron including the development of a brewery and charitable donations.

Lion will tighten its grip on the nation’s multi-billion dollar craft beer market after a deal to buy Fermentum Group, the creators of one of Australia’s most popular craft beer brands Stone & Wood which accounts for around 1 per cent of the national beer market.

For years Stone & Wood has beaten its independent path in one of the most independently spirited towns in Australia, Byron Bay, shunning the ‘big end of town’ of the large commercial brewers to remain fiercely craft and separate from the major brewers Lion and CUB.

Now it will become part of Lion, owned by Japanese beverage giant Kirin which in turn is part of the Mitsubishi Group, after it announced that it and the shareholders in Fermentum had reached an agreement for a 100 per cent sale that will hand “custodianship” of the Fermentum family of brands to Lion, subject to regulatory approvals.

The jewel in the crown of the beer brands is Stone & Wood and Lion has committed to back its growth, and continue their positive impact in the community.

The Fermentum Group is comprised of leading brands, including the flagship Stone & Wood, Two Birds, Fixation, Little Dragon and Sunly Seltzer. The deal is subject to regulatory approvals, the process for which has commenced.

According to its latest financial report lodged with ASIC, Fermentum posted revenue of $62.3 million in 2020, up from $59.87m, while its profit weakened to $5.09m from $6.83m in 2020. The profit was hit by Covid-19 in the final quarter of fiscal 2020, but co-founder Jamie Cook said revenue and profitability has bounced back strongly through 2021 and that its annual sales were now fast approaching $100m.

The Japanese owned brewer sees itself as a “custodian” of the brands, led by Stone & Wood, and believes lovers of the brands will not see any difference to the culture and values that support the Byron Bay brewer.

“Stone & Wood brands is one of the strongest and most loved brands of all beer brands in Australia, not necessarily craft, so that is the attraction, it is a beautiful brand, unique business culture,” Mr Brindley said.

“I think one of the reasons we were chosen as the next generation custodian of this brand is that we both have fundamental values in terms of doing good in the world and protecting communities, investing communities and looking after people.”

As part of that commitment, Lion will continue Fermentum’s commitment to the Northern Rivers community, near Byron Bay, building a new brewery in Murwillumbah, donating $5 million to the inGrained Foundation for long term positive impact and another $1m to Big Scrub Landcare Inc.

“Our intention is to build and grow this brand, and the only way we can do that is to keep to the fundamental principles and beliefs of what the brand stands for and I think that can be done irrespective of ownership.”

Many of the founders of Fermentum are former executives at Carlton & United Breweries, with former Foster’s boss Trevor O’Hoy a shareholder and board member of Fermentum.

Craft beer has experienced premium growth to standard or traditional beer for decades and the largest brewers in Australia, Lion and CUB, have been fighting a pitched battle for years to acquire the most popular craft beer brands.

This added to its extensive craft beer shopping list – part of it brought in by CUB’s ownership by Asahi and before that when it was owned by AB InBev – that now sees it own Mountain Goat, 4 Pines, Green Beacon and Pirate Life.

Not to be outdone, Lion has spent around $1 billion picking up its own selection of craft brewers, led by the $380m purchase of Little World Beverages nine years ago and whose beer brands include Little Creatures and White Rabbit. In 2007 it paid $325m for Tasmanian premium craft brewer J Boag & Son and acquired Byron Bay Brewing.

Fermentum co-founder and chairman Jamie Cook said the combination of timing and finding the right custodian to take the business forward made this the natural next step for Fermentum.

“After an extensive strategic review exploring options to set us up for future growth, we decided to test the waters on whether now was the right time for the founding families to find a custodian to grow Fermentum’s legacy, its people, its culture and its brands, and continue to drive the business forward whilst staying true to its purpose.”