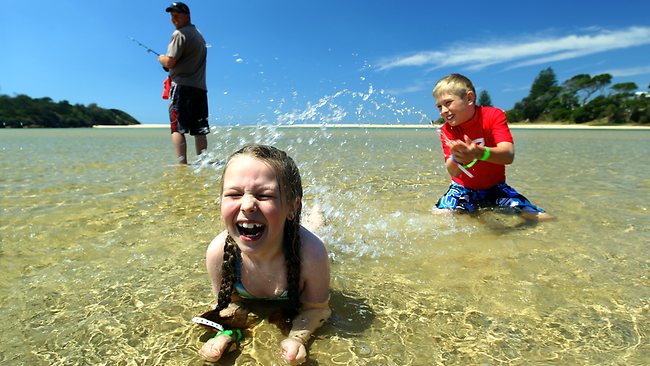 AFTER two years of wet and wild weather the sun is finally preparing to shine on the coastal towns of NSW bringing a much-needed tourism boost for struggling locals.

While beach towns are suffering under the weight of a gloomy global economy, a high Australian dollar and a persistent La Nina, the outlook couldn’t be more positive.

Local businesses from kayaking tour operators to bottle shops and caravan parks told The Sunday Telegraph they were looking forward to a boom as holidaymakers, driven away by the unusually wet and cold summer last year, returned to the coast.

James Steinmetz, a business owner at Crescent Head, says bookings were down as much as 30 per cent last year.

“We’re weather-dependant, much like the snow-fields,” Mr Steinmetz said. “If they don’t get a good snowfall everyone stays away, if we don’t have decent weather it’s the same story with us.

Mr Steinmetz said the internet had changed the way a lot of people plan their holidays. “People can leave their trips until the last minute now and look for bargains. And when they see that the weather is bad here they don’t bother to make the trip out.”

The forecast of better weather has brought with it improved interest and a brighter Christmas and New Year’s period.

“We had the best Queen’s Birthday long weekend in five years this year.

“And Christmas is looking good as well. It’s a relief for us. Things were pretty bleak for a while there.”

And it should continue.

Josh Fisher, a senior meteorologist from Weatherzone, said all signs indicated we are in for a hot summer.

“That brought with it a lot of rain and associated climate conditions.”

“We will remain in a neutral El Nino phase this year and the positive phase of the Indian Ocean dipole should bring with it warmer than average temperatures.”

“But the longer, hotter summer this year should bring improved prospects for tourism.”

Scott Carver, manager of Lakesea Park at Durras Lake on the south coast, said last year’s business was so slow he was forced to drop rates.

“Not long ago people would stay in Australia for their family holidays,” he said. “But now we have a situation where up to one million Aussies went to Bali last year.

“Air fares keep coming down and if the weather is bad at home that’s just one more reason to head overseas.”

Mr Carver said this year’s warm weather had improved business and he had targeted slower periods with more aggressive pricing.

“This year is shaping up better than the last two,” he said. “We’ve filled a lot of holes that were vacant and everything is shaping up to be a fantastic year.”

While most businesses said the change in weather was a relief Port Macquarie was a noticeable stand out, remaining steady and resisting a drop off in what has been a bleak period for other areas.

“People sometimes call us ‘Sports Macquarie’,” Ms Ellis said. “We’ve got a full calendar each year including not just sports events but festivals, celebrations and a growing food and wine industry.”