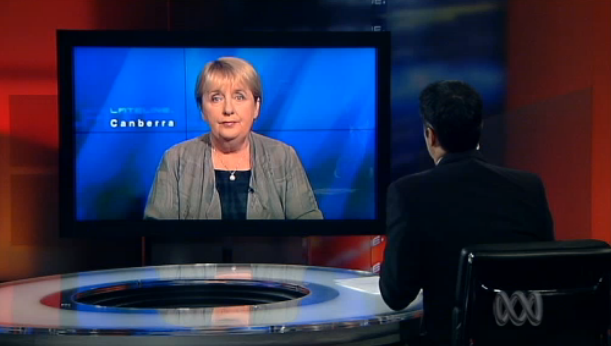 From abc.net.au See Jenny Macklin being interviewed by Steve Cannane on Lateline here.

Indigenous Affairs Minister Jenny Macklin says she has requested an assessment of two Alice Springs hotels that she says may be contributing to alcohol-related harm.

The move comes after a day that saw the Federal Government clashing with the Northern Territory and Queensland governments over their alcohol management plans.

Now Ms Macklin says she has written to NT Chief Minister Terry Mills asking him to send assessors to audit the business practices and licensing conditions of two hotels in Alice Springs.

“We’ve certainly had far too much evidence of anti-social behaviour and harm to the community [at these two premises],” she told Lateline.

“[We’ll] have an assessment done of the licensing conditions and the business practises and then, of course, act on that assessment.

“We want to see this as a joint responsibility between the Commonwealth and the Northern Territory Government.”

In the annual Closing The Gap speech to Parliament, Prime Minister Julia Gillard said she had a real fear the “rivers of grog” that wreaked havoc on Indigenous communities were starting to flow again.

But the Country Liberal Northern Territory Government has rejected that call.

“We’ve been appointed with a clear majority five-and-a-half months ago on the basis that we would scrap the register,” she said.

“We did that for one reason and one reason only. It wasn’t working. And we do not intend to reinstate the Banned Drinker Register.”

Mr Scullion is opposed to reinstating the BDR and says the Commonwealth is making empty threats.

“[This is] simply something Jenny Macklin and Julia Gillard can beat their chest about,” he said.

Ms Macklin says while she is intervening in other areas to increase the regulation of alcohol in the Territory, the Banned Drinkers Register is not a federal matter.

“The Banned Drinker Register certainly had a positive effect. There was evidence there were fewer anti-social incidents,” she said.

“I certainly do have a number of powers under the Stronger Futures legislation that enable me to implement changes in relation to alcohol-management plans … but this is Northern Territory legislation.

“The Northern Territory Government should reinstate the Banned Drinkers Register. It was a helpful measure and we should see it back.”