India’s 2nd biggest airline out of the sky 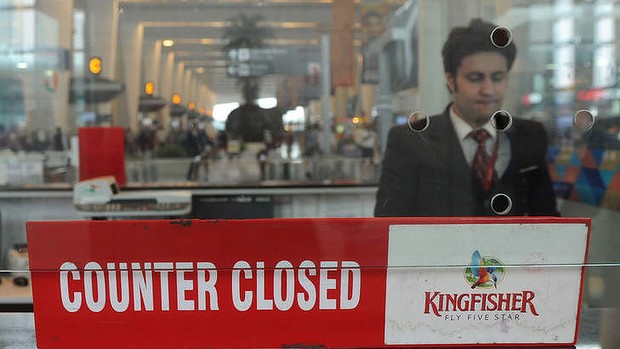 India’s troubled Kingfisher Airlines has lost its permit to fly after a deadline to renew its suspended licence expired, the national aviation regulator said on Tuesday.

The news is a fresh blow for the debt-laden carrier whose operations have been grounded since October after employees went on strike over unpaid wages.

“They failed to provide additional details on the funding of operations,” Mishra added, referring to Kingfisher’s revival plan submitted to the DGCA last month.

But the airline said there is no “cause for concern” as the rules allow for the renewal of a permit within two years of expiry.

“Kingfisher is confident of securing approval from the regulator on the restart plan, licence approval and reinstatement of its operating permit,” its spokesman Prakash Mirpuri said in a statement late Monday.

Kingfisher, controlled by liquor baron Vijay Mallya, owes millions of dollars to banks, airports, fuel suppliers and its staff and has been looking for a foreign investor to inject fresh funds.

The firm has been the worst-hit of India’s airlines in 2012, with the industry plagued by high jet fuel prices, fierce competition, price wars and shabby airport infrastructure.

The carrier was India’s second-largest until a year ago but its share shrank to just 3.5 per cent — the smallest in the country — before operations stalled completely.

Kingfisher said it was in talks with foreign investors including Abu Dhabi-based Etihad Airways after the government cleared investment by foreign airlines in the key transport sector.

Aviation analysts have expressed doubt over Etihad’s purported interest in Bangalore-based Kingfisher given the Indian firm’s debt load, which is estimated at $2.5 billion by the consultancy firm Centre for Asia Pacific Aviation.