How lake Tyrrell got on the map 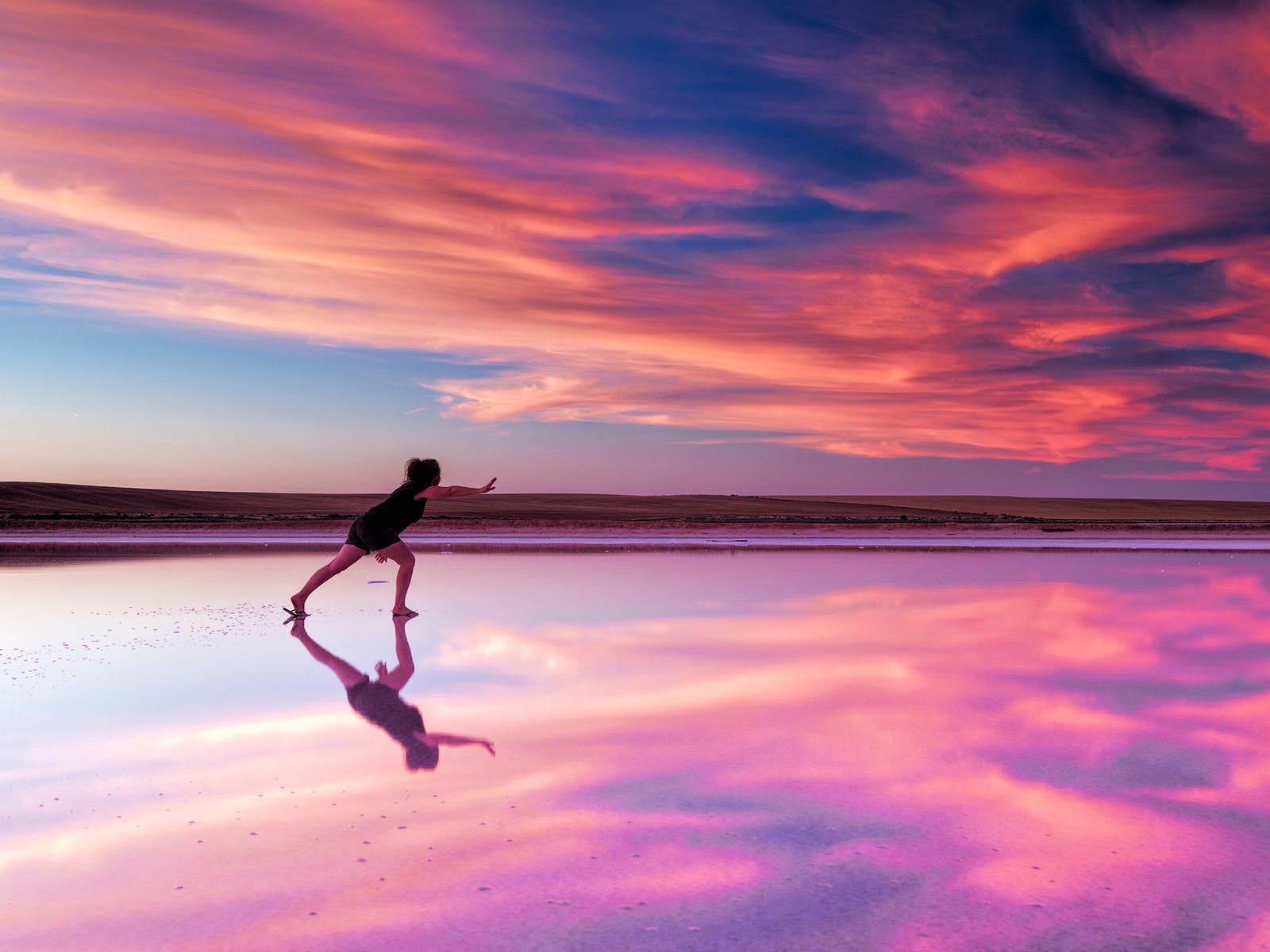 It started with Chinese tourists looking for photogenic landscapes as professional photographers, suddenly the locals realised that they were sitting on a gold mine. The famous aesthetic scenes of the lake are created when the setting sun bleeds through the clouds to produce a palette of pink, orange and blue on the lake surface.

In a land as broad and empty as the Mallee, you’ve got to look hard to spot the prize, and today the window of opportunity is a shallow one. It’s no longer afternoon, but the sun refuses to call it a day. We can’t see it but we get its effects, a long pink glow hovering in a band between the low cloud and the faraway horizon. It’s a staring contest: avert your eyes and you lose, so you maintain the gaze. And you’re repaid with a teasingly lingering closure to the day.

I wasn’t expecting to get so entranced by Lake Tyrrell, an expansive salt lake 75km west of Swan Hill in northwest Victoria. Well, not by its cloud cover. I’d heard that the night sky was the star of the show here, producing a dazzle off the shallow lake that was so amazing, its allure was felt far beyond its shores.

It started several years ago with a stream of visitors from China, drawn to this outpost by professional photographers’ social media postings of such a rare astral phenomenon. Suddenly the locals realised that if people would travel that far to see a lake that principally was mined for salt, then they were sitting on a goldmine.

We’re here at what tour operator Julie Pringle from the nearby town of Sea Lake calls “golden hour”, when the setting sun bleeds through the clouds to produce a palette of pink, orange and blue on the lake surface. “You think you want a blue, sunny sky but you actually need a cloudy day to get the reflections,” says Pringle, who, with partner Ross Williams, is a driving force behind Sea Lake’s tourism resurgence.

What you don’t want is wind to ripple the lake’s otherwise glassy surface. Fortunately, this spring afternoon is breezeless and it’s as if the filtered sunlight is bouncing back to spotlight the clouds. And while they have a blue-grey hue when looking directly at them, the reflections reveal swathes of pink and amber.

At night, the colours give way to starry white when, depending on the phases of the moon, the sweet spot can be anywhere from 10pm to well past midnight. With no light bleed from the town, the reflections off the lake are breathtaking, particularly the Milky Way. As one of our group says: “You feel like you can touch the sky with your hand.”

And that’s about as far as one should go. The salt surface is not reliable, even during the day, and Williams has had to rescue over-enthusiastic guests from his Sea Lake accommodation business who’ve driven too far out and got bogged. Fortunately, a new circular boardwalk on the southern shore allows easy passage on to the crust.

Tyrrell, which at 21,000ha is the largest salt lake in Victoria, gets its name not from some self-important explorer but rather the local Boorong word “tyrille”, meaning both sky and space. The Boorong’s ancient interpretations of the night skies are particular to their understanding of creation where, for instance, the Southern Cross contains Bunya the possum scampering along a branch to escape Tchingal the hungry emu. Such stories have led to scientists acknowledging the Boorong as the world’s first true astronomers.

The gravitational pull of the lake has also reignited Sea Lake (population 640). A new visitor centre and several businesses have opened, plus it’s now got two 21st-century must-haves: a Tesla charging point and the NBN.

And it can also claim another Mallee phenomenon as it’s the latest destination in the Silo Art Trail, a collection of 11 sites across western Victoria where artists have used the local grain infrastructure as concrete canvasses. The Sea Lake silos, by Queensland street artists Drapl and The Zookeeper, depict a young girl on a swing, soaring out over Lake Tyrrell and reflecting on her Indigenous heritage; one written in the stars.