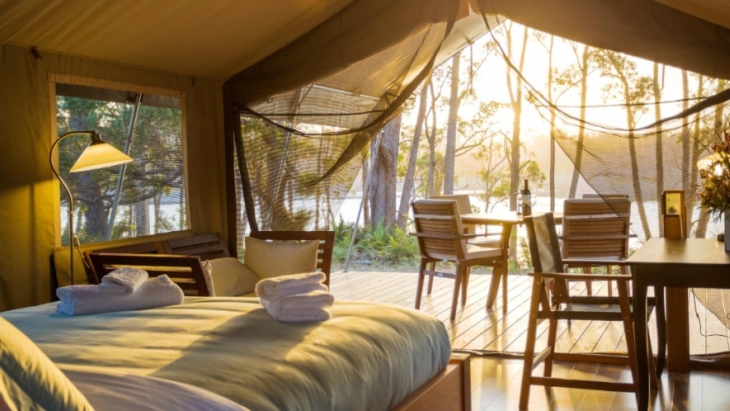 A proposal to turn the former Quinns Rocks caravan park into a wedding venue with glamping tents has been supported by City of Wanneroo officers.

Candidates were invited to lodge submissions for the development and operation of a “low impact and environmentally sensitive tourism accommodation development”, with only two submissions received.

The northern suburbs community will soon be able to have its say on a proposal to turn the former Quinns Rocks caravan park into a wedding venue with glamping tents that has been supported by City of Wanneroo officers.

The submission from Heritage WA Investments is for glamping tents, which would be powered, furnished, air-conditioned, have an ensuite bathroom and be built on raised decking to eliminate concrete slabs.

There would also be a fully licensed restaurant that could be used for functions and weddings, and a lawn area with the potential for a pool.

A council report said the lawn area and accommodation could be used for weddings and work with nearby restaurants and the Quinns-Mindarie Community Centre.

Other users could include tourists, yoga, health and wellbeing retreats, family and community groups, corporate getaways and surf carnivals, with the venue also available for small concerts.

While the council report acknowledged the proposal did not provide a wide range of accommodation options, with no options for chalets and bring-your-own camping and Heritage WA Investments expressing reservations about including caravans, it said it was the “best alternative”.

It said other interest was limited and the development constraints, including the environmental considerations, site area and potential construction costs, justified a narrower scope of accommodation.

This follows the city’s expression of interest process to investigate market interest, which included direct emails to 23 business and industry associations.

Candidates were invited to lodge submissions for the development and operation of a “low impact and environmentally sensitive tourism accommodation development”, with only two submissions received.

The second submission was from the Campervan and Motorhome Club of Australia to develop a basic facility for self-contained RVs, with guests providing their own shower, cooking, washing and sleeping facilities. It would not include any other on-site accommodation.

However, an internal city evaluation panel recommended this submission be rejected, which the council agreed with.

While it was also recommended the council authorise entering into negotiations with Heritage WA Investments, deputy mayor Brett Treby moved an amendment to just “continue discussions”, with another report on a potential lease to be presented to the council.

“We are not asking the community what they want. We are asking them to either accept an inappropriate development to what they were expecting, or to reject it,” Cr Natalie Sangalli said.

“We have never asked them what they want on that land.

“The community wanted and supported a caravan park. They did not support a holiday park or glamping or anything else.”

At the meeting, several residents raised concerns with the preferred proposal, saying it did not reflect what the community wanted or the EOI asked for, and there were already parking issues in the area with the vacant site currently used for overflow parking.

Concerns were also raised with how the proposal would affect the Quinns Mindarie Surf Life Saving Club’s proposal to lease and develop 350sqm next to the club.

The council report said Heritage WA Investments planned to keep the trees on that land to provide a screen from the site to the club and use part of it for car parking.

It also had concerns with noise from club members using the area “interfering with wedding ceremonies, events and guests trying to sleep in the glamping tents”.

Another amendment was made to ensure the engagement would include community consultation asking for residents’ views on the preferred use for the site.

A report on the feedback will come back to the council.