Fury over lockdowns in Europe 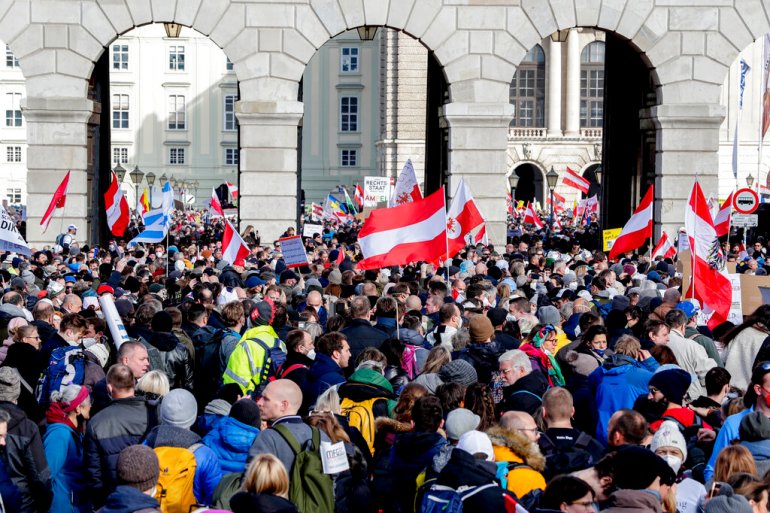 Europe, once again, is at the centre of the pandemic.

Cases are surging across the continent as the highly contagious Delta variant makes its way, through Europe’s population.

In Austria, protesters were marching against the governments increasingly tough measures against anti-vaxxers.

On November 22nd the government imposed a full lockdown, to last for at least ten days.

In Germany, However, there has been popular support for vaccine mandates. A survey of 7,500 respondents, suggests that 72% would favour a vaccine mandate, and only 20% would oppose it.

The sight of 40,000 unvaccinated Austrians marching through their capital, Vienna, in recent days was troubling twice over. The tightly packed opponents of lockdown measures were at risk of spreading the coronavirus. They also threatened to stir up an already tense political situation. Karl Nehammer, Austria’s interior minister, warned that anti-vaxxers in the Alpine republic are growing more radicalised. He called the demonstration’s mood “incensed” and “aggressive”. Some protesters were extremely provocative, carrying placards likening Alexander Schallenberg, Austria’s new chancellor, to Josef Mengele, the sadistic physician at the Nazi concentration camp in Auschwitz.

The protesters were marching against Austria’s increasingly tough measures against anti-vaxxers. On November 22nd the government imposed a full lockdown once again, to last for at least ten days. That compels Austria’s 9m people to hunker down at home, leaving only for work, essential shopping and exercise. Austria is also the first Western democracy to make covid-19 vaccinations mandatory for all, starting on February 1st 2022. “For a long time—maybe too long—I and others assumed that it must be possible to convince people in Austria to get vaccinated voluntarily,” said Mr Schallenberg when he announced his “very difficult” decision.

Europe, once again, is at the centre of the pandemic. Cases are surging as the highly contagious Delta variant makes its way, belatedly, through Europe’s population. The World Health Organisation said on November 23rd that deaths from covid-19 across the continent could exceed 2m people by March. (The Economist’s own tracker suggests this number was long ago surpassed.) Last week reported deaths increased to close to 4,200 a day from 2,100 at the end of September. The disease has become the leading cause of death in Europe.

Will more countries respond with the sort of strict measures seen in Austria? As hospitals in central Europe fill up, anxiety grows. Around 66% of the total population in the European Union is fully vaccinated, but vaccination rates vary greatly between countries. Farther west, they are remarkably high. Among the over-12s in Portugal, more than 88% of the population is fully vaccinated. By contrast, in Bulgaria the share is below 25%. Within Germany there are also large east-west variations.

Support for a nationwide vaccine mandate, previously a taboo, is now rising in Germany. Prominent politicians had repeatedly promised that such a mandate would not be considered. But several state premiers, including Daniel Günther of Schleswig-Holstein, Markus Söder of Bavaria and Volker Bouffier of Hesse, now back such a measure for the entire country. Many Germans agree. A survey of 7,500 respondents, conducted in the past few days by Civey, a pollster, suggests that 72% would favour an Austrian-style vaccine mandate, and only 20% would oppose it.

Andrea Ammon, the head of the European Centre for Disease Prevention and Control, has warned that vaccine mandates could provoke more resistance from anti-vaxxers, which seems plausible. But officials made their full-throated promises to keep vaccinations voluntary when taming the pandemic looked easier. Now, however, as winter forces more people together indoors and the Delta variant runs rampant, the pressure to return to lockdowns and impose tougher vaccine mandates may grow harder to resist.