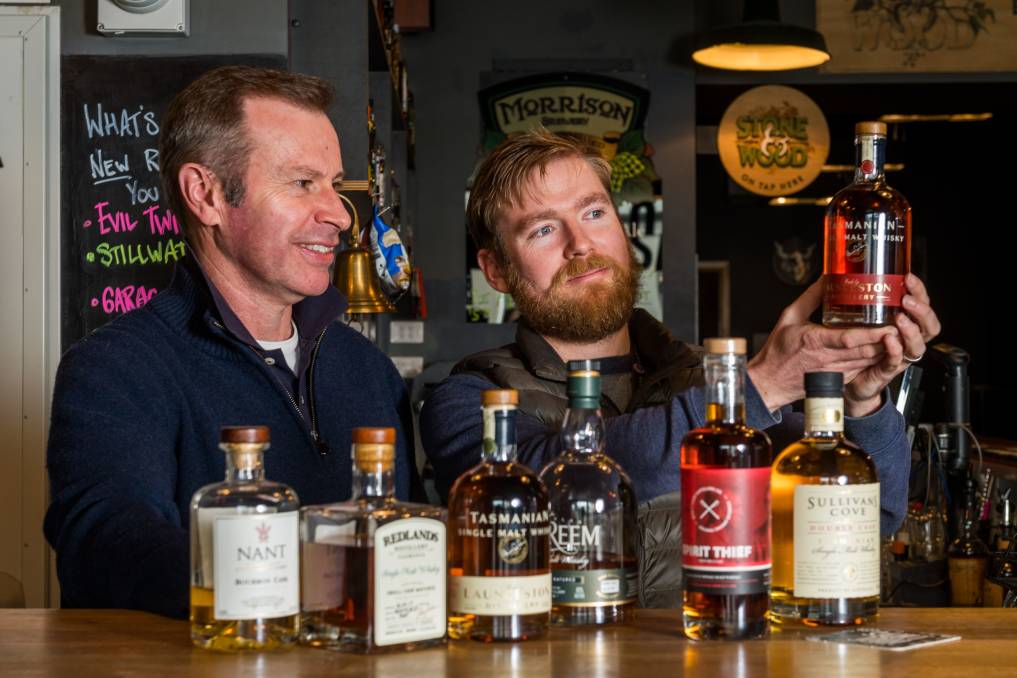 Tasmania’s spirit industry has come a long way, from distilling spirits being outlawed with the famous saying from lady Jane Franklin “I would prefer barley be fed to pigs than it be used to turn men into swine” in 1838. Now having over 60 distilleries, some having international recognition.

IT’S a line etched in Tasmanian whisky folklore: “I would prefer barley be fed to pigs than it be used to turn men into swine.”

The words of Lady Jane Franklin prompted her husband, Governor John Franklin, to outlaw the distilling of spirits in Tasmania in 1838.

Fast forward 154 years: A Tasmanian couple successfully lobbied to have the archaic law changed. And so Bill and Lyn Lark became the first household in the nation to distil a single malt spirit in more than a century-and-a-half.

Speaking on the eve of Tasmanian Whisky Week, Mr Lark said he and his wife didn’t set out to pioneer a new industry or even start their own business.

Plus, they were fearful of offending the legendary distillers of Scotland – the home of whisky.

“But within two weeks of getting our licence, I had tremendous support from the Scottish industry and they were so excited and they said, ‘If you’re going to make whisky, would you let us help you make good whisky?’” Mr Lark said.

In 2015, Mr Lark became the first person in the southern hemisphere to be inducted into the Whisky Hall of Fame.

So what has been the secret to the local industry’s success?

“Our industry has been successful because of the collaboration and friendship among industry partners,” Mr Lark said.

“You do not have to be afraid of competition. In fact, if you embrace competition and you work together, you can not only make a good business but you can create an industry.”

“Tasmania has a climate similar to Scotland,” Mr Turner said. “Pure water and high quality barley – all the ingredients needed for making whisky.”

But Mr Matthews said Tasmania’s biggest advantage over mainland Australia was the ingenuity of its distillers.

“You can have all the clean water, fine barley and good climate you like (but) without the people to harness it, you wouldn’t get the amazing whisky,” he said.

One of the state’s most prominent distillers is Heather Tillott, the distillery manager at Sullivans Cove.

Established in 1994, Sullivans Cove – headquartered at Cambridge – has gone from humble beginnings to a giant of the industry, culminating in one of its French oak cask whiskies being named the Best Single Malt Whisky in the World at the World Whiskies Awards in 2014.

“Our small scale means that Tasmanian distillers are really getting their hands dirty in a way that no longer happens in the larger-scale whisky producing regions of the world,” Ms Tillott said.

“When you then consider the cool climate ideal for cask maturation, and a group of folk who love their place and its produce, then perhaps it is destiny, no?”

“We have seen many new distilleries open their doors in recent years, and each one brings their own ideas and individual style to the product they create,” he said.

“This is leading to more diversity in the style of whisky being produced in Tasmania and is broadening what is seen as the Tasmanian whisky style.”

However, not everyone is completely optimistic about the industry’s future.

Tim Duckett, the founder of Heartwood Malt Whisky and Tasmanian Independent Bottlers, said the sheer number of distilleries in the state today would likely lead to an eventual “correction”.

“There are a lot of distilleries that are going to be competing for the same position in the market in the near future,” he said.

“I think those that don’t overcommit will be fine. Those that overcommit may struggle if they don’t have significant money behind them.”

Mr Lark said he was excited for the future and that the industry was changing “for the better”. But he said he could envisage there being a “problem” if the number of distilleries in the state kept increasing.

“The local market might perceive (there) to be a distillery on every corner,” he said. “But that’s certainly not the case now.

“And I don’t think it’ll be the case for a while yet.”

So who are Tassie’s movers and shakers in the distillery world?

Lark Distillery (Est. 1992): Bill and Lyn Lark are considered the founders of the Tasmanian whisky industry. Their famed distillery produces some of the best whisky, gin, brandy and rum in Australia – and it all comes housed in meticulously handcrafted bottles.

Sullivans Cove Distillery (Est. 1994): The second-oldest whisky distillery in Tasmania, Sullivans Cove is the brainchild of Patrick Maguire, a proud descendant of convicts on both sides of his family. In 2014, the distillery was recognised as having produced the world’s best single malt whisky.

Hellyers Road Distillery: Located near Burnie, the lauded Hellyers Road was founded by an unlikely group of dairy farmers. It’s the largest boutique whisky distillery in Australia and exports to more than 20 countries.

Nonesuch Distillery (Est. 2015): Family-owned and operated, Nonesuch was originally established as a gin distillery, but expanded to produce whisky in 2017. Acknowledging that it can’t compete on price with the larger distilleries, Nonesuch has made it its mission to produce the highest quality product it can.

Killara Distillery (Est. 2016): Founded by Kristy Booth-Lark, the daughter of Bill and Lyn, Killara is named after the Kingston street where Kristy’s parents set up their distillery in the early 1990s. She describes her products as “smooth” and “distinct”.