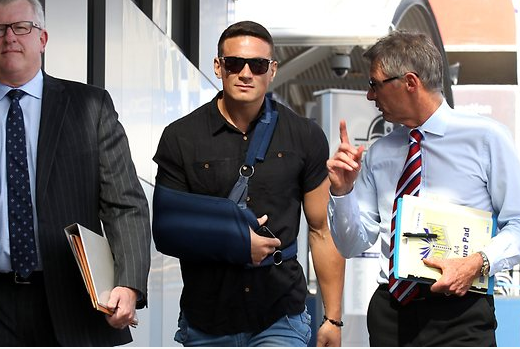 NSW’ nice guy of Rugby League has finally said what he really thinks at the expense of Sonny Bill Williams.

Williams left the Bulldogs mid-season in 2008, at ‘a time we really needed him’, said El Masri. “For me, the way he left the game, if that was up to me I wouldn’t let him back in the game,” El Masri told Ten News.

SONNY Bill Williams expects to submit a contract to the ARL Commission by the end of the week after a meeting with interim chief executive Shane Mattiske cleared the way for his return to rugby league.

Four years after walking out on the game, Williams strolled into Rugby League Central yesterday to outline his desire to return to the sport that made him famous.

As a result, the Sydney Roosters will today formally announce the worst kept secret in rugby league when Williams fronts a media conference at Allianz Stadium to reveal he has agreed to a one-year contract with the club.

“It was positive that Sonny Bill came to the game to discuss his intentions to put forward a registered contract,” Mattiske said.

“He recognises the importance of complying with the rules and he has given us every indication he intends to comply. Sonny Bill has provided some background about how he came to an agreement with the Roosters.

“He has indicated he is close to finalising the terms of his playing contract … so that it can be submitted to the NRL by the end of the week.”

The New Zealand international has been playing rugby union in Japan but a chest injury and resulting surgery meant he was able to put the finishing touches on his deal with the Roosters.

The injury means Williams is unlikely to play again in Japan and has placed a cloud over his starting date with the Roosters – officials had hoped he would be fit to play in round one, most likely against South Sydney.

While his return is regarded as a coup for the game and the Roosters, not everyone is happy. His comeback will take place under a cloud after former teammate Hazem El Masri claimed he should not be allowed back.

El Masri was a teammate of Williams when the dual international walked out on Canterbury and has not forgiven him for the way he left his fellow Bulldogs in the lurch.

Asked whether he was happy to hear Williams was coming back to the game, El Masri told the Nine Network: “To be honest, I can’t lie, not really.

“I think the way he left the game, I think the game should never let him back in.

“I am not here to cause headlines, that is just my opinion.” The Australian first revealed the Roosters’ interest in Williams more than a year ago.

His return will not be the only big announcement this week.

Former Parramatta and Warriors coach Daniel Anderson has been charged with restoring some credibility to the NRL’s refereeing ranks, his appointment expected to be made official within days.

Anderson will be appointed to the newly created position of high performance manager.

Leading match officials Tony Archer and Russell Smith will be given supporting roles under the refined structure, which is expected to be announced by the ARL Commission this week.

Anderson was initially linked with the job when former referees coaches Bill Harrigan and Stuart Raper were sacked last month and it is understood talks with the ARL Commission stepped up a notch last week.

The Australian was told late last week that Anderson had leapfrogged another former coach, Brian Smith, as the preferred candidate. His appointment is now expected to be confirmed as early as today, signalling a return to the past by the commission.

While Harrigan was a high-profile referee before stepping in to an overseeing role, his predecessors Robert Finch and Peter Louis had no such experience.

Nor does Anderson. He has his hands full given the season the referees have had. High-profile blunders on the field and in the video box meant the whistleblowers came in for unprecedented criticism, which ultimately cost Harrigan and Raper their jobs. Raper is exploring his legal options.