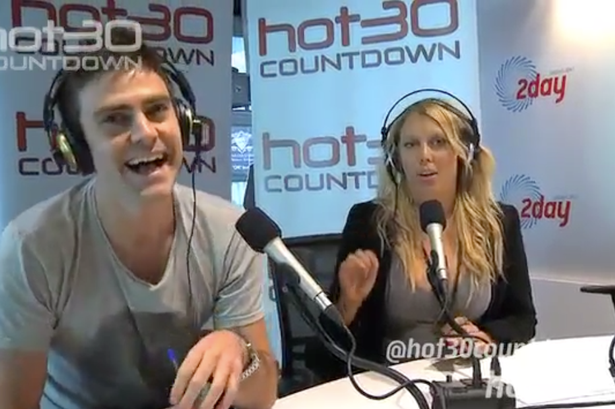 Radio is luring more and more advertisers as a direct result of the controversial content being broadcast by program hosts.

Questionable content is accepted by the stations in a bid for ratings, aware of dollars to be generated from advertisers who seek to influence their targeted listeners.

In 2005, Austereo promised millions of dollars to Kyle and Jackie O if they could lift 2Day FM’s breakfast show from number 5 to the top position. They accepted the opportunity and moved to the coveted slot.

Within a year they had succeeded. As part of the incentive, Kyle was presented with a gold microphone and a cash bonus which took his salary to $2 million.

Despite the string of on-air scandals the pair have been involved with over the years, their show has survived, protected by Austereo because of their achievements. They have done what was asked of them: make the show one of the company’s key assets.

Jeff Allis, a former programming manager for Austereo said Kyle “grabbed” the opportunity to host during the toughest slot, when ratings are always higher, and make the show number one. “He wanted to be somebody,” Allis said, when Kyle made the leap to the breakfast time slot.

The breakfast show now attracts over 500,000 people weekly by itself, but added to their nightly Hour of Power highlights package and Take 40 they reach 1.5 million people every week. Many of the listeners are not concerned by occasional offensive content.

“Although there is more money spent on TV advertising, radio is a more effective means as it targets a specific audience,” said Ralph van Dijk, founding creative director of Eardrum, a specialist radio advertising agency.

Van Dijk explained that there is “less wastage” in marketing to key demographics with radio advertising compared to television.

Only around eight per cent of Australia’s advertisements are currently broadcast over radio. Though, it remains a strong medium to connect with the four out of five Australians who regularly tune into commercial radio.

The Australian Bureau of Statistics 2011 Census data indicates more than 75 per cent of Australia’s workforce travel to and from work by car each day.

2Day FM made a statement apologising to the hospital, but admitted the radio segment had been done with “light-hearted intentions.”

However, the prank led to the suicide of the British nurse who disclosed the details to the 2Day FM pair, throwing the show into turmoil. A number of sponsors immediately withdrew their support of 2Day FM following the international scandal.

In a skit somewhat reminiscent of Orson Welles’ 1938 Halloween narration of ‘The War of The Worlds,’ Triple J’s Tom and Alex aired a statement issued by Prime Minister Julia Gillard addressing the public in regard to the end of the world.

Although the joint effort between the radio station and Ms Gillard has been met by mixed reactions, the performance which has been played around the world has offered a light-hearted, comedic side to the politician not often seen.

It is these types of exploits from the hosts which is allowing radio to become the medium of the moment.