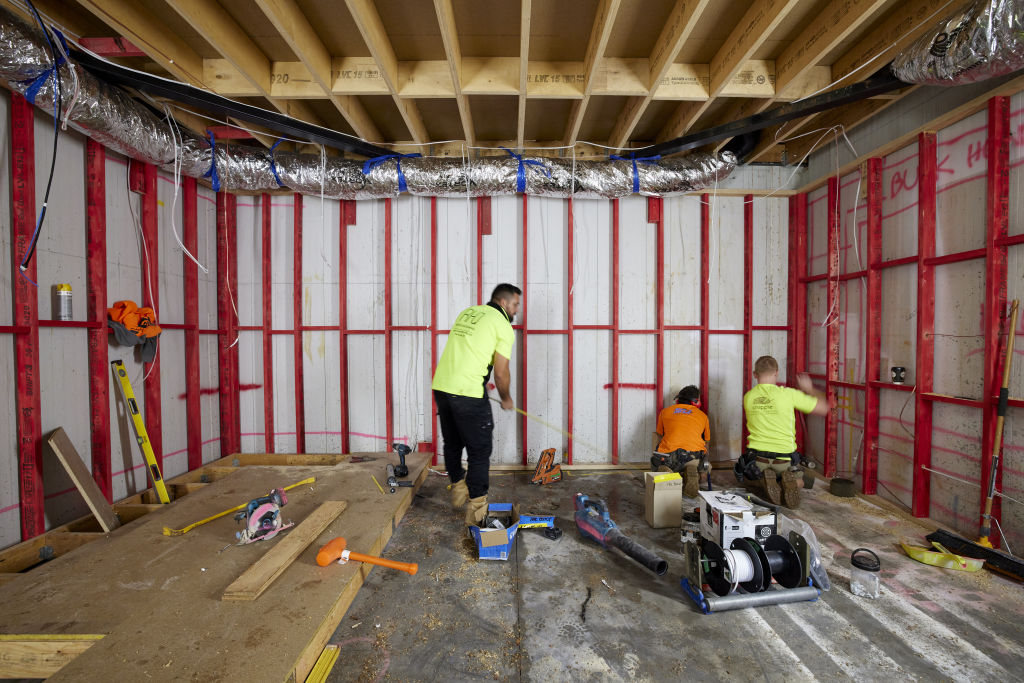 This years season of the block has explored the concept of basement spaces in homes for the first time, here we look at the growing popularity of the basement in modern designs.

With a key driver being the shrinking block size and height restrictions in cities, the basement is offering an opportunity to develop additional space for a home theatre, games room or cellar.

For the first time in the show’s history, contestants on this season of The Block will deliver basement spaces – a feature not commonly found in Australian homes.

We decided to do a little digging of our own to find out why so few of our homes play host to these subterranean spaces given their proliferation in places like the US, UK and Europe.

Turns out our preference for living above ground largely comes down to climate and cost.

Australia’s mild weather gives us year-round access to fresh food – something most of us take for granted. But in locations closer to a polar latitude, food harvested in the summer is stored in the basement for consumption over the long winter months. In America, says Ken Gerschler, an American-born town planner from the Council Approval Group, this practice continued right up until the 1950s.

“Historically, the basement was where the summer garden crop could be canned and sustain a family through winter,” he says. “You could also store firewood and coal and keep it dry, and you could use the basement as a safe haven during a tornado and extreme weather events. Post-World War II there was a bomb shelter craze – my own grandparents in California had one.”

Gerschler says while many older American homes still have basements, a lot of newer homes don’t.

“A lot of people look at basements as creepy, haunted places,” he says. “But there’s a real push with modernisation to add lighting and ventilation and make basements into additional living spaces.”

Over his 15 years in Australia, Gerschler says he hasn’t seen much interest in basement spaces other than for car parking.

“Ninety per cent of the population live a very short distance from the coastline, and that’s conducive to an outdoor lifestyle,” he says. “Frankly, basements are not high on people’s priority list.”

The benefit of a basement

However, architect Dominic Bagnato, who specialises in building and renovating high-end Melbourne homes, can see basements becoming more popular in Australia’s inner-city areas where block sizes are shrinking and land prices are rising.

“Land has become expensive and people are realising the only ‘land’ they can make is up in the air or beneath us,” he says. “Basements are proving more popular because height restrictions often prevent us from going up.”

Bagnato Architects has been asked to include a basement in a number of client projects over the years, with a variety of functions.

“A few years ago clients wanted an extra room for a home theatre or a cellar,” Bagnato says. “Now we’ve migrated to the current trend of wanting basement parking to house eight to 10 cars.”

Basements can be used for bedrooms and bathrooms, games rooms and media rooms, laundries and gyms, music rooms and wine-tasting rooms.

Bagnato is a big believer in making spaces multipurpose and suggests clients install data cables, power, plumbing and lighting and opt for higher-than-minimum head height so that a space can be reimagined down the track.

“We designed this beautiful cellar for a client, then the next buyer saw it as a great music room for his daughter,” says Bagnato. “So ask yourself what else could this room be and what would you need to make that work?

“If you’re installing a home theatre and want to tier the seats, I would never rake the floors so it’s permanently tiered, just get a carpenter in to build a platform. Then one day you can change the use of the room.”

Bagnato also recommends installing, or making provision for, a lift to access the basement.

“Everything is possible; it’s just about working with the constraints of your site and your budget,” he says.

Ahhh, yes, your budget. Have we mentioned that building a basement is a rather costly exercise?

Underpinning specialist Doug Atcheson of Best Underpinning says the price of creating a basement for an existing home starts at around $60,000 and goes up from there depending on size, soil type and groundwater.

“It’s more expensive to build down than to build up,” he says. “A basement generally becomes an afterthought, so you’ve got to underpin the house before you excavate.”

Atcheson is currently working for a Bronte, Sydney, client who wants an additional floor to play host to a double garage and a man-cave.

“Bronte is all sand, so it’s a big project to do and manage safely,” he says. While rock has its own challenges, Bagnato says sandy soil generally presents the biggest issues and therefore the biggest bills.

“When you dig a hole the sand just collapses into it so you have to do piles,” he says. “You have to drill holes in the shape of your basement to a depth that hits stable soil.”

Gerschler says if the basement is going to be a habitable space, you’ll need to meet the Australian Building Code, which includes appropriate waterproofing and ventilation.

“People don’t always spend the money on handling the groundwater prior to building their basement,” says Atcheson. “So we build a nice new basement for them but then the backyard water runs under the house in heavy rain and in comes the water because it hasn’t been caught around the back of the house and redirected around the house.”

Bagnato says water is always the number one challenge because it is always looking for a way in.

Then there’s the issue of getting water out of your basement. When pipes are above ground, gravity is your friend. Below-ground taps and toilets will require a pump – or two if you want your system to be fail-safe.

“If the first pump fails, a second pump will do the work and the occupants above will be notified via an alarm that a pump has failed,” says Bagnato. “This gives them time to repair the first pump and not face a flooded room.”

Is it worth it?

Atcheson suggests asking one simple question when weighing up the merits of building a basement: Will you get your money back if you sell?

“Get a present valuation on your place, then get an estimated valuation for the basement addition,” he says. “If the figures add up and you need the space, then go for it.”

“The conversion of existing spaces under a home is possible for a basement but what I’ve observed is it’s cost-prohibitive,” he says. “But if your property value is very high, if you have a little postage stamp [of a block], you’d be glad to pump in a whole bunch of money to get the most out of it.”