Injured Del Piero makes it to the Melbourne Cup 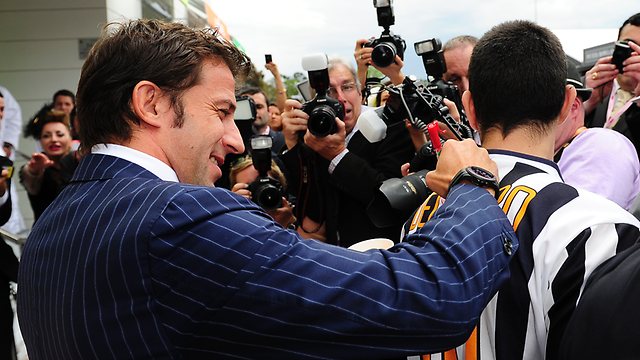 IF Ian Crook thought he faced a daunting enough job in coaching Sydney FC, walking into training will pose the club’s head coach a whole new challenge this morning.

How to pick any side up from a 7-2 blitzing is a tough enough question to answer, but when it comes in the infancy of a major rebuilding project, Crook has to get the tone of his address to Sydney’s players today pitch-perfect.

Crook hopes to have some significant returning cavalry by the team’s next outing this coming Saturday, but that fixture will bring no hiding place.

Melbourne Victory at Allianz Stadium always pulls a crowd, even before the arrival of Alessandro Del Piero, and consistently rates as one of the season’s highest-watched games on TV. The prospect of watching how Sydney respond to such a defeat just adds to the allure.

CROOK didn’t offer the number of missing first-teamers as an excuse for what happened on Saturday. Five likely starters – Pascal Bosschaart, Adam Griffiths, Fabio, Joel Chianese and of course Del Piero – were all absent, and all bar Fabio may be ready to face Melbourne Victory.

Essentially, Sydney are playing with a makeshift back four, uncomfortable on the ball and lacking a leader with the vision to organise those around him. It renders Crook’s vision of building from the back almost impossible to implement until the first choices return.

But you could also point to the midfield and forward line, noting that of the six players playing on Saturday, almost all would have designs on a starting spot. They have a lot to prove this week.

IF Saturday night’s defeat was to be reduced to a single concern, the way the Sky Blues fell apart would be hard to go past. Sydney were without key players, but the point of a squad is that the reserves learn from the same song sheet.

Instead – and even allowing for Crook’s change of formation at half-time – Sydney fell apart at the seams. Players stopped tracking back and lost concentration, all of which were directly the cause of the Central Coast Mariners’ last three goals.

It’s crudely simplistic to suggest the visitors gave up. Far more worrying is the way their tactical discipline disintegrated. That is what Crook has to work on most quickly – defensive structure was the first thing Graham Arnold put in place two years ago, and is the basis for everything the Mariners do now.

FOR many reasons, Ian Crook is not under pressure for his job. Teams do suffer freak results (witness Arsenal at Manchester United last season), especially when key players are missing. In a wider sense, club owner David Traktovenko appointed Crook knowing the scale of the rebuilding job required, from personnel to style.

Crook made it clear on taking the job that he would try to play in one way only, and succeed or fail that way. That was the deal board and coach signed up to. But what this result does do is intensify the scrutiny of how Sydney play when his first XI is fit. Arguably seven of them could be Crook-era signings, and what happens if Sydney are still losing as heavily – or at least playing as poorly – in six weeks’ time, with a full deck of cards?

DEL Piero’s reaction to Saturday’s result would not be lost in translation. The Italian was angry enough at the end of last week’s highly flattering 2-1 win over Perth, upset according to assistant coach Zeljko Kalac “that a couple of players weren’t pulling their weight when we were in front”.

Now Del Piero would have every right to expect that the training load he shoulders is matched by his teammates. He is invariably the first to arrive and last to leave. He knows his body inside out and trains it accordingly.

His fellow senior pros have a significant role to play in setting similar standards, for Sydney’s incredible support will demand nothing else.