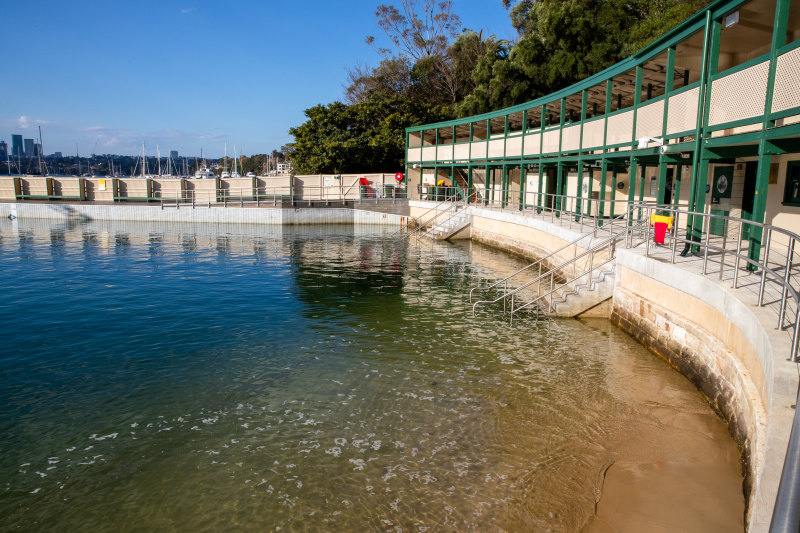 Dawn Fraser Baths in Balmain will welcome swimmers this week for the first time in two years after Health Minister Brad Hazzard gave the green light for Inner West Council to reopen the newly renovated harbour pool during lockdown.

Mr Hazzard last week signed an amendment to the public health order that states: “For the avoidance of doubt … the Dawn Fraser Baths in Balmain can be open to the public”.

The intervention came after The Sun-Herald reported on the disparity between the closure of Dawn Fraser Baths under the lockdown rules while similar pools on the ocean, such as Wylie’s Baths in Coogee, remained open. Inner West Mayor Darcy Byrne subsequently wrote to the minister asking for clarification.

“Being able to swim and enjoy Australia’s oldest and most beautiful harbourside pool will really lift the spirits of local people,” Cr Byrne said.

“With beaches having been cut off and public pools closed, many regular swimmers had lost their most important source of physical exercise and mental relief, right at the time that they needed it.”

The pool will operate with a booking system, allowing a maximum of 26 people at a time to visit for up to an hour. Bookings will open online on Monday with the first swimmers allowed from Wednesday.

The Baths will be open to residents of the Inner West Council area and people within a 5km radius and Cr Byrne said it would be free for at least the first two weeks.

Toilets will be open, but there will be no access to change rooms, showers or sunbathing and the pool will be divided into lanes to ensure physical distancing.

Dawn Fraser Baths is a tidal salt water pool enclosed by a wooden structure next to Elkington Park in the western harbour and does not have a circulation system. However, in interpreting the public health order, Inner West Council’s incident management team noted “natural swimming pools” were not enclosed and people could freely come and go in the same way as a public space such as a park or a beach.

The heritage-listed pool has been closed since 2019 for an $8 million heritage refurbishment that included engineering works to lay new foundations on rock 8-10 metres below the water and to raise the Baths’ decking floor level to mitigate the effect of rising sea levels.

The pool was due to reopen last December and in March 2021, Cr Byrne controversially referred council staff to the auditor-general to investigate continued delays, causing the general manager to resign in protest. The investigation is still ongoing.

Built in the 1880s, the Baths are Australia’s oldest existing public pool, according to the Inner West Council. It was renamed in the 1960s after local Olympic champion Dawn Fraser who learnt to swim there.