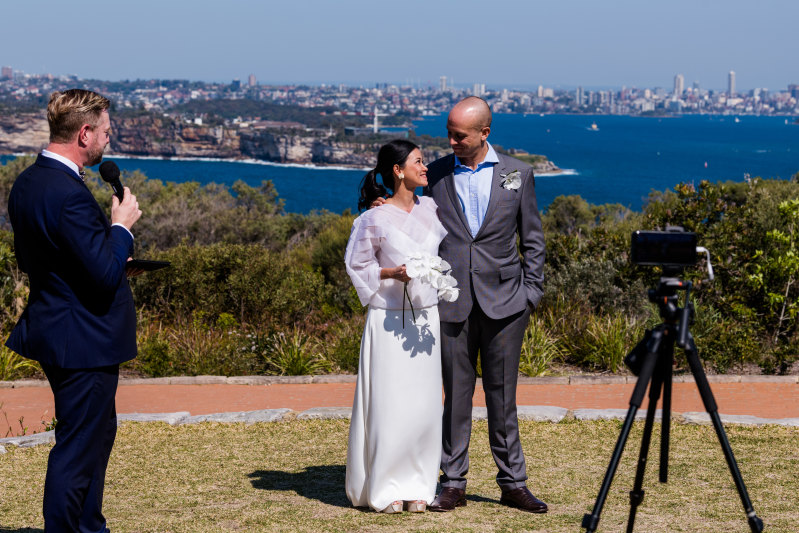 After months of limbo and uncertainity manly couple Nina Miranti and Andrew Conduit tied the knot, after they planned their event in 6 days following Sydney covid restrictions easing. The couple who initially planned their wedding for August was happy to start their new lives together.

The wedding industry has been hard hit by the Sydney lockdown.

The wedding of Sydney couple Nina Miranti and Andrew Conduit required more contingency planning than most.

The Manly residents were among the couples who scrambled to plan weddings after the Berejiklian government decided COVID-19 restrictions would ease to allow marriage ceremonies with up to five guests from Friday.

The changes followed months of limbo for couples like Ms Miranti, 35, and Mr Conduit, 40, who planned their event in six days after strict rules to slow the spread of the Delta variant banned weddings for three months.

“Last Saturday, Nina and I were just relaxing with a coffee and Mum came in shrieking ‘Turn on the TV, turn on the TV’. It was Health Minister Brad Hazzard making his announcement about weddings being allowed,” Mr Conduit said.

“We booked [marriage celebrant] Stephen within an hour, we wasted no time. The wedding has gone through various iterations since then. We’re beyond happy we were able to make it happen.”

Most guests watched the Friday mid-morning ceremony at North Head via livestream. The handful of family members and friends greeted each other with elbow bumps instead of hugs, and a brush turkey took a bite out of the bride’s phalaenopsis orchid bouquet. But Ms Miranti was “ecstatic” and “very happy” to finally take her vows.

Mr Conduit agreed. “For Nina and I, today is everything. It’s about starting a new life and, for us, there is nothing more important.”

The couple was disappointed when Sydney’s long lockdown meant they had to cancel their wedding, which was planned to take place at the Pilu at Freshwater restaurant with a few dozen family and friends on Saturday, August 21.

“That was a bit of a sad weekend because it was the day we were supposed to get married. We put our activewear on and walked up there and got a takeaway banquet from the restaurant instead,” Mr Conduit said.

They later secured an exemption to get married by a celebrant and with two witnesses, which was scheduled for last Wednesday. But the government’s decision to ease restrictions from Friday to allow guests prompted their decision to again push back their plans a couple of days.

After the ceremony, the couple planned to share a glass of champagne with Mr Conduit’s mother at home while video-calling Ms Miranti’s parents in Jakarta. The rules still do not allow for a reception or a honeymoon.

“Hopefully, when the world’s back to normal, we can go to Italy,” Ms Miranti said. Mr Conduit conceded that lockdown restrictions meant they were more likely to travel to Fairlight than Florence for now: “That sounds about right.”

One Sydney celebrant had four weddings booked for Friday, while at least two weddings had been booked for Anglican churches in Sydney on Saturday.

Small legal marriage ceremonies were allowed during last year’s lockdown in NSW. Mr Conduit and Ms Miranti’s celebrant, Stephen Lee, said the tighter restrictions this year had been tough on the wedding industry.

“But we do now have this window open again where people can come forward and get married.”

Mr Lee said he had a backlog of couples wanting to get married. Some had postponed their weddings three or four times. Others were happy for a simpler ceremony – a trend he suspected might continue after the pandemic.

“When you strip a wedding back to what it is, and it’s just two people saying I love you and I want to spend the rest of my life with you. It brings a different level of intimacy to it. It’s really a very special thing.“