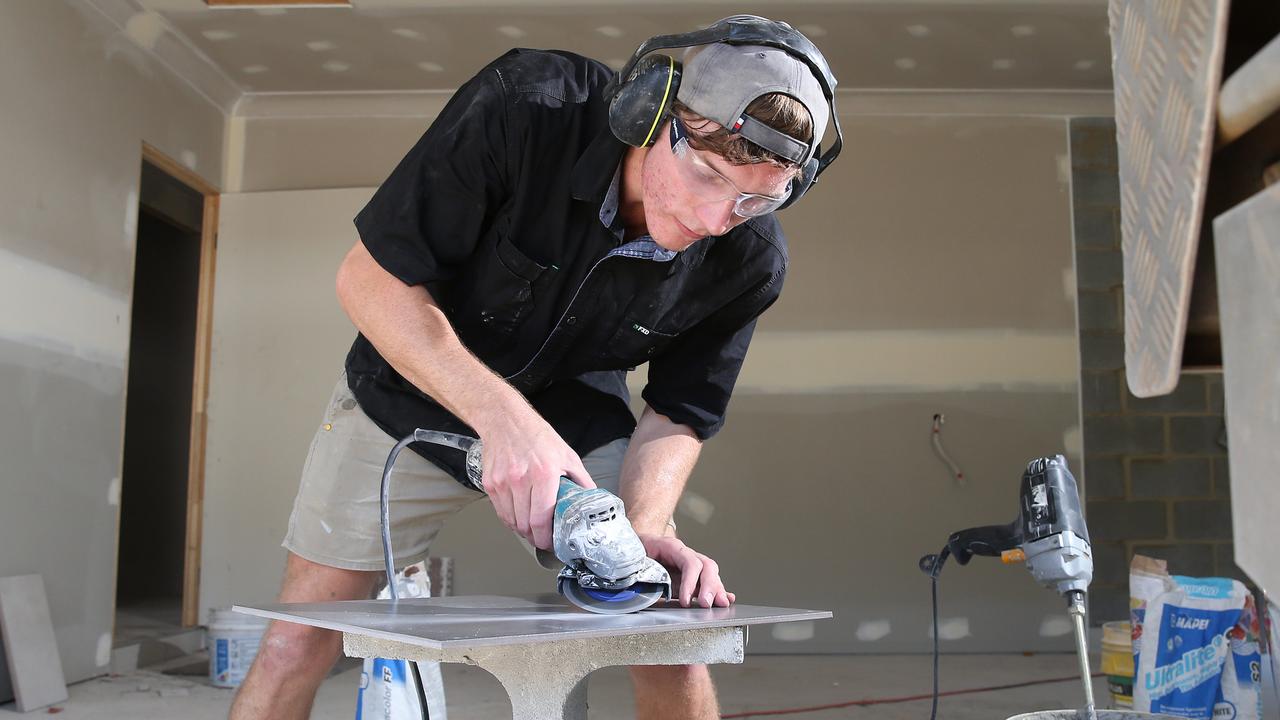 Construction bosses are deploying creative strategies to beat the labour shortage and keep up with the boom in new homes in Cairns. Employers are starting to offer three-day weekends to their staff without falling behind schedule during a demanding period for the industry.

HIA Cairns and FNQ manager Shane Moon said the benefits some tradies were enjoying were more than just the increase in work-life balance.

CONSTRUCTION bosses are deploying creative strategies to beat the labour shortage through an industry boom in the Far North while others are forced to work seven-day weeks.

In an industry, where due to the nature of employment with a heavy use of subcontract agreements, most workers tend to miss out on “corporate benefits” – paid leave, rostered days off and defined hours and days off in lieu are few and far between.

However, HIA Cairns and FNQ manager Shane Moon said employers were starting to offer three-day weekends to their staff without falling behind schedule during a demanding period for the industry.

“It’s to reward the right staff to be with them in the industry. I know of a builder who’s doing it that and the productivity is actually increasing for his business.”

Mr Moon said the benefits some tradies were enjoying were more than just the increase in work-life balance.

“They’re all paying overs (in wages), I know guys that are getting company cars thrown in, they’re not even having to use their own tools, everything is being provided.

“I’ve seen pictures of building business owners, carrying equipment and supplies, just to keep the tradies on stock. Everyone is going above board, I don’t think there’s one (business owner) who’s sitting in an office, they’re all on job sites and leading from the front.”

Mr Moon said the local industry was booming, despite a potential perception of tough times for companies, following the recent collapse of multiple Queensland building firms including Far North based businesses. A number of local construction industry firms entered liquidation in recent months including Sawcom Homes which in June owed its creditors more than half a million dollars, Heartland Building Pty Ltd which owed almost $1m and Mareeba-based firm BPB Mareeba which entered voluntary liquidation in February, owing $2.3m at the time.

And a June Cairns Regional Council report showed the city’s demand for dwellings was back on an upward trajectory with 59 approvals in May, the highest since November last year when 69 were approved in a month.

Mr Moon said after the recent panic caused by supply shortages, rising costs and delayed schedules, the industry had adapted.

“There was a period where some of them were barely breaking even on the builds because some of them hadn’t prepared themselves correctly, but the guys are learning and adapting.” 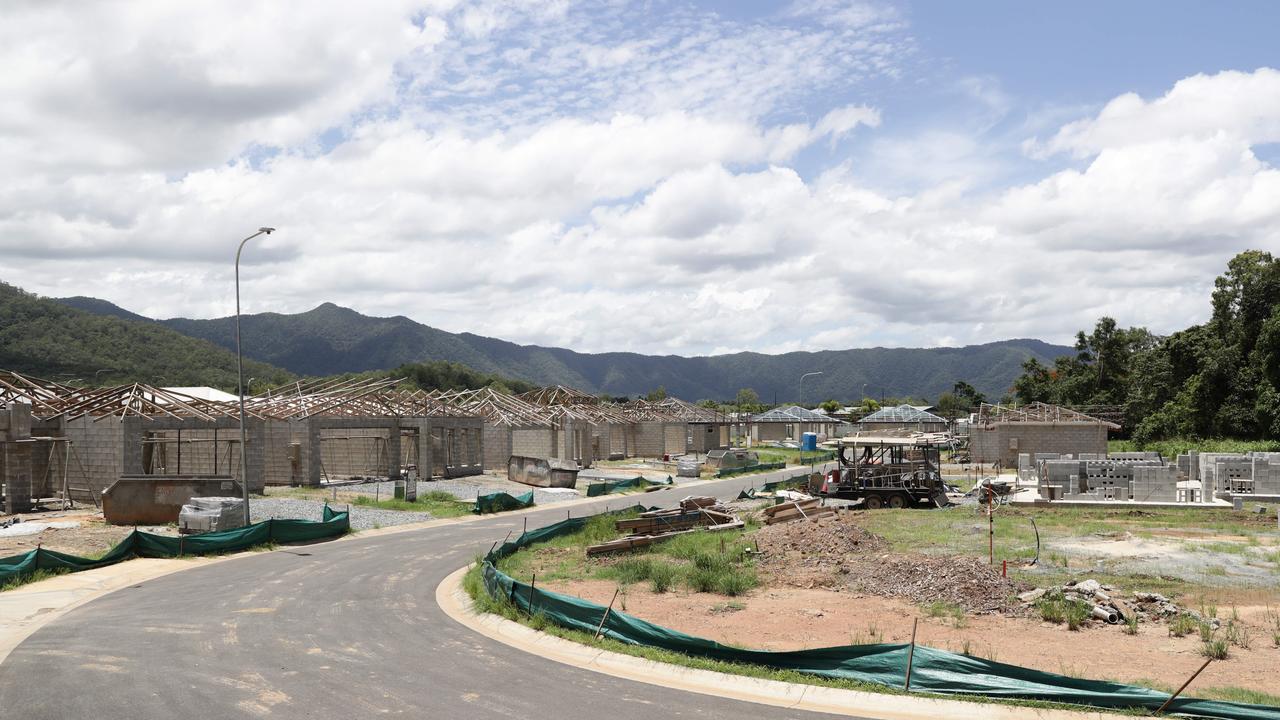 HIA Cairns manager Shane Moon says the industry has adapted and is balancing the situation with rising costs and limited supplies. Housing construction and building work under way and real estate for sale in the Mt Peter residential estate just south of Edmonton. Picture: Brendan Radke

“A lot of the builds that are happening are on fixed-price contracts, so builders have to compensate for that potentially, they might be able to start a house for six months so you have to balance that and make sure you’re protecting your business.”

But Mr Moon said to avoid heartache for buyers, he suggested “building a relationship” with the builder.

“A lot of people are actually interviewing the builders themselves to work out who they want to build their house,” he said.

“At the end of the day, costs are going to continue rising, it’s a fact of life.

“But it’s just having that open dialogue with your builder, regularly chatting with them and understanding the process so expectations can be managed.”

Mr Moon said the ongoing concern for the industry was ensuring a future workforce.

“There’s always a big push on university, but the university campus they’re at wasn’t produced overnight, it was built by somebody, and they’re people we need to start working with and getting them through (apprenticeships),” he said. “There are couple of schools in Cairns where they have really good initiatives where they start bringing the kids into pre-vocational (trades) courses. Getting them trade-ready.

“A lot of schools did focus on this back in the day, a but lot of them now focus more on the university aspect of the world. University is not for everybody, so can we incentivise schools to be able to push trades a little more.”

One business owner suffering from the skilled labour shortage described the situation as a “bidding war” for talent. 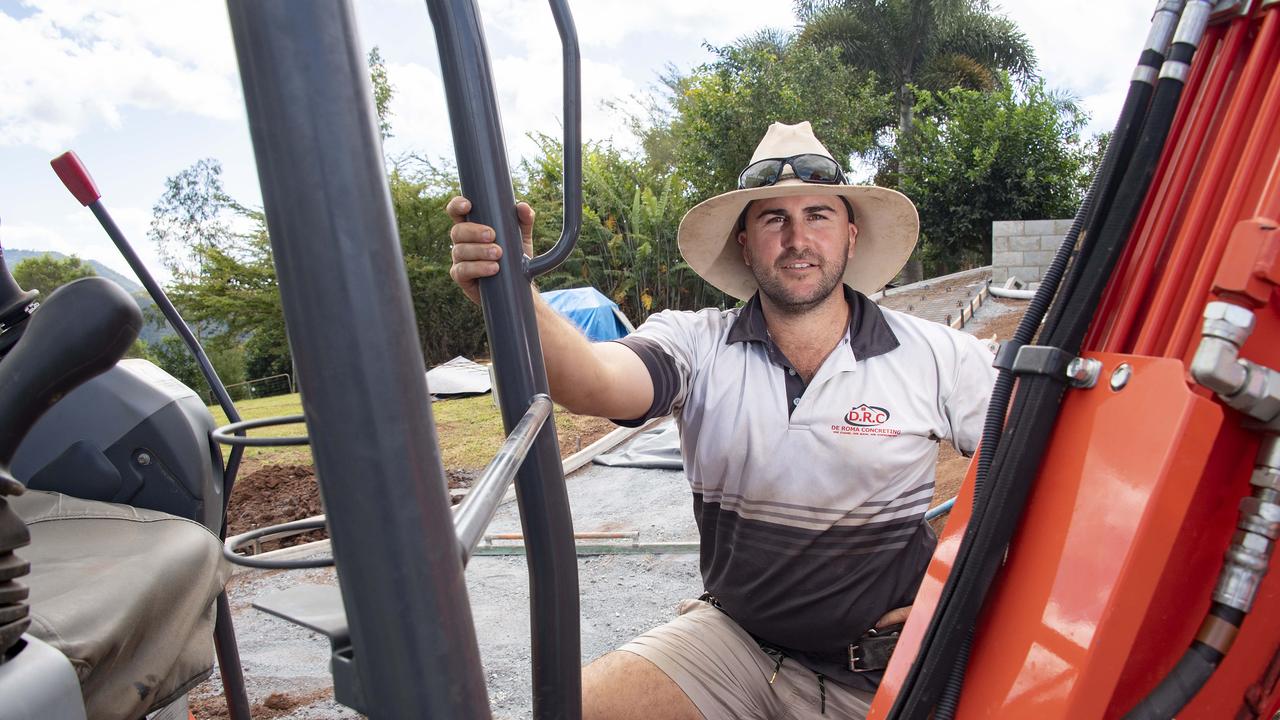 Concreter Matt De Roma has to work seven-day weeks sometimes to keep up with the demand he is facing, pictured here at a Goldsborough job site. Picture Brian Cassey

De Roma Concreting owner Matt De Roma spent his weekend on sites at Innisfail and Goldsborough, just to keep up with the demand he was experiencing, with seven-day working weeks becoming common for the concreter.

“We’re just trying to keep up, getting around four phone calls a day. Before we’d get maybe three phone calls a week,” Mr De Roma said.

He said most of his work was generally direct with the public, but recently he was receiving more calls from builders. “Usually builders have a concreter and they stick with them, but obviously they weren’t keeping up so they were just trying to find new guys.”

Mr De Roma said his biggest challenge was also a shortage of labour, who he would generally subcontract for work.

“Because there’s that much work around, guys just want more money and they just keep jumping to the next biggest payer, so the labour cost has just gone through the roof. It’s hard to quote on jobs.”

He said “a couple years ago” concrete subcontractors were getting paid about $400 a day, now they were being offered up to $550 a day.